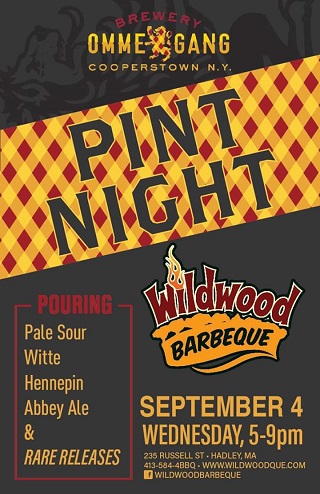 [Sept. 4, 2019]–Brewery Ommegang rolled into Hadley, Massachusetts tonight to take over the taps at Wildwood Barbeque, as some brewery is wont to do on the first Wednesday of each month.

As the image shows, some classics from the Cooperstown, New York brewery were on hand, including a couple reviewed before, most recently the luscious Rosetta and an old favorite, the Abbey Ale. (Plenty of brewery history to be found in those posts.) The Hopstate was frequently requested as well, an IPA brewed from all New York State hops.

The Nirvana IPA was not available but it was the only Ommegang brew I hadn’t previously reviewed that I could lay my hands on before the event, so there you have it. Not that I’m sorry. It’s a very nice brew, indeed, the first American style IPA the brewery turned its hand to.

There is a melange of aromas thanks to a melange of hops in the mix, seven in all. Five are thrown into the brewkettle (Bravo, Simcoe, Centennial, Topaz, and Mosaic), while Amarillo, Centennial, Citra and Simcoe are used for dry-hopping. Yet there’s a distinct malt aroma in the nose as well as well as peach and apricot notes, and indeed this is more of an early American style IPA than today’s more trendy NEIPA. 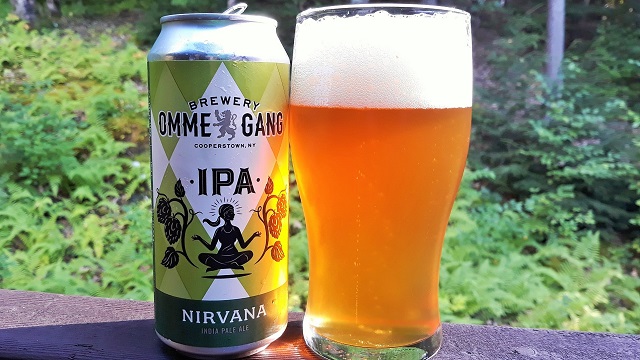 Which is to say the beer has an aggressive head, it’s relatively clear, there’s a healthy malt character to it and there’s a hearty bittering finish (if not quite west coast style bitterness). But it is wildly floral and citrus fruity, too, with a particular grapefruit character. All of which I find quite appealing. In beer equivalency terms, it reminds me of Anchor Brewing’s Liberty Ale, which is an exceedingly good thing. Not perfect enlightenment, perhaps, but certainly an enhancement to the day.

Whether such a beer has a shot in today’s marketplace might seem a little dubious, through the haze of NEIPAs. But it has been around since a limited introduction in 2015 (it’s now a year-round beer), so there’s that going for it.