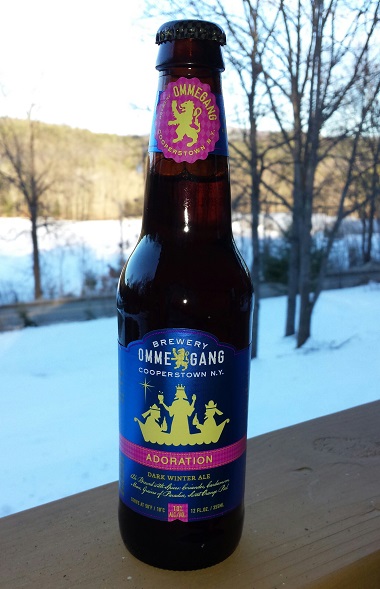 The spicing is generous, as one might expect from a beer seemingly inspired by the adoration of the magi. There are the three kings right on the label, following yonder star, although they appear to be in a boat and carrying beer instead of gold, frankincense and myrrh.

This would appear to be playing fast and loose with scriptural text, but we’ll let it go, and just note that the spices include coriander, orange peel, mace, cardamon and grains of paradise. If this makes Adoration start to sound like a pumpkin or wit beer, rethink it. It’s a more complex mix of spicing that doesn’t readily reveal the players but is highly alluring. The beer pours out a darkish amber. There’s some fire in the nose, rich caramel, maybe a touch of licorice and figs.

As typical with Belgian-style beers, hopping is minimal, but it’s enough to help the spices dry out the huge malt character of the beer and leave a slight puckering finish. Yes, it’s sweet, but in the best possible way—never cloying.

The beer is strong as in 10% ABV strong, so a four-pack of 12-ounce bottles would be quite a gift for a babe in a manger. (Perhaps one the parents could best administer.) Yet the beer never seems overly heated in the consuming. That comes later, when all of a sudden you realize you have some fire in the belly.

Ommegang’s website suggests the beer is best sipped before a roaring fire, and that’s precisely what I’m doing right now. However, I did bring some to the Christmas party we went to tonight, opened one bottle and shared a few pours. I opened a second and made the mistake of walking around a bit, and that bottle was ne’er seen again. My gift, though I arrived more thanks to Google maps than a star in the East.

Great party as always, an annual blast that includes much singing. We do a few carols—or at least “Jingle Bell Rock”–and then it’s a free-for-all of rocking sing-alongs. Can’t say that I managed a really good shot of the doings, but there was much Christmas cheer evidenced in the faces of the singers delighted by the experience.

I’ve said “Belgian-style” several times in this report, but it’s a bit of a head-scratcher, really. Though Ommegang is in Cooperstown, New York, it’s owned by Duvel Moortgat of Belgium. (I went into some of this background in a piece on Ommegang’s Abbey Ale.) The house yeast is undoubtedly Belgium. So what is Adoration, really?

It’s really good, is what it is. 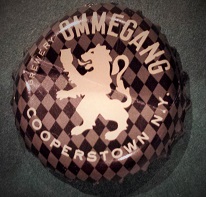