Those wags at BrewDog in Scotland have done it again, this time giving new meaning to the phrase, “Have a stiff one,” and making another appearance in the now apparently continuing series, The End of the Beer World As We Know It.

While maybe not quite as gruesome as the company’s 55% ABV The End of History, surely the first confluence of beer and taxidermy, Royal Virility Performance is surely the first professional blending of beer and Viagra. (Amateurs have been doing it ad hoc for quite some time now.)

The news began gushing forth yesterday from the BrewDog blog, announcing a limited edition of 1,000 bottles of the beer to be made available only on the company website, going for £10 per bottle, on April 28, the day before the much-ballyhooed wedding of Prince William and Kate Middleton.

One complimentary bottle was sent off to Prince William; according to BrewDog partner James Watt, “We put a bottle in a jiffy bag marked ‘Prince Willy, Buckingham Palace.’ We sent it by Royal Mail as we presume they are most likely to know where he lives. As the bottle says, this is about consummation, not commemoration, so we hope he gets it.” 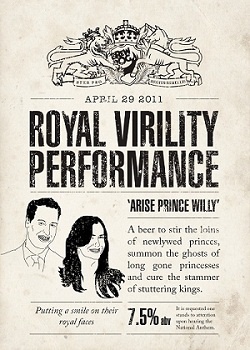 Maybe it’s really in there, a tankard of tumescence. We can think of about 1,000 lawsuits that would come raining down on the brewery from every direction if such a brewing attempt were made in the U.S.A. Squadrons of lawyers streaming forth from the Feds and Pfizer would be just the beginning. Once consumers got their fists around a few of these 330ml bottles one can only imagine the creative clamor for damages that would, um, arise.

The brewers may have covered their tracks somewhat by offering 20% of all profits to Centrepoint, a U.K. charity for homeless youth that the late Diana, Princess of Wales served as patron; her son, Prince William, became the patron in 2005.

The dose of sarcasm also extends to the many commemorative brews that are being produced in the onrush of the wedding, brews variously named I Will, Windsor Knot, Something Blue, Kiss Me Kate, Better Half. So why not Arise Prince Willy, as the RVP is nicknamed? 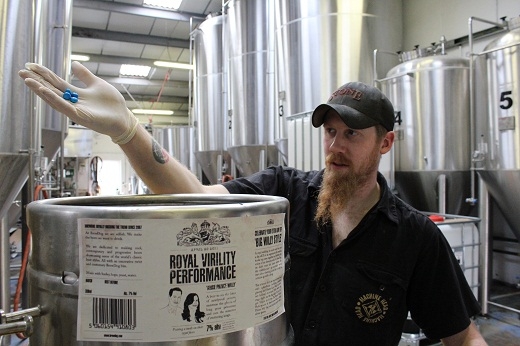 In go the little blue pills....

According to the blogsite: “With this beer we want to take the wheels off the royal wedding bandwagon being jumped on by dozens of breweries; The Royal Virility Performance is the perfect antidote to all the hype. A beer should be brewed with a purpose, not just because some toffs are getting married, so we created something at our brewery that will undermine those special edition beers and other assorted seaside tat, whilst at the same time actually give the happy couple something extra on their big day.”

Beer has itself sometimes been called an aphrodisiac, although Shakespeare wisely noted in “Macbeth” that drink “provokes the desire but it takes away the performance.” These cheeky brewers may have put a spike in the old saying, while provoking a different kind of Scottish play altogether.