Reports appear to be untrue that Sasha Baron Cohen, prior to dumping ashes on Ryan Seacrest at the Oscars Sunday night, had warmed up in Germany on Ash Wednesday by pouring a stream of beer down the back of Chancellor Angela Merkel.

While disguising himself as the waiter in this video wouldn’t have been a stretch for Cohen the provocateur, the unlucky oaf appears to be a Greek so far identified only as Martin D. No confirmation on whether is still employed, or living.

There’s hope for the latter in that he was quoted in the Bild newspaper, “A colleague should have brought her the beer. But she was so nervous, she asked me to do it for her.” Big mistake. 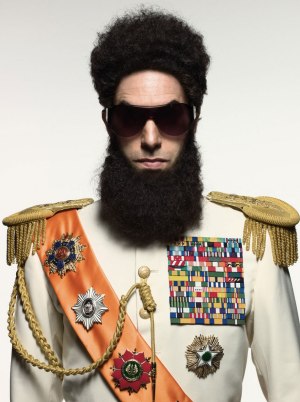 Sasha Baron Cohen as The Dictator

Mr. D. claims he was jostled by someone behind him, prompting the Merkel dousing. But the wondrous slow-mo replay in the video strongly suggests that Martin was merely inept, and that in leaning over to give the Chancellor her beer, he thereby tilted the tray, sending five other glasses of undoubtedly fine German lager all her way.

Martin also said he was troubled that he uttered an expletive at the moment his life began crumbling in front of him, but he made no claim that his statement or action had anything to do with the Greek economic crisis or how it has been handled by Germany or other partners in the European Union.

Merkel, for her part, was clearly unperturbed, merely whisking away a stray fleck of foam from her cheek and going on to toast her tablemates. She also went on to address the assembly of Christian Democratic Union members gathered in Demmin as scheduled. Her reception was reported to be warm, even if she was slightly damp.