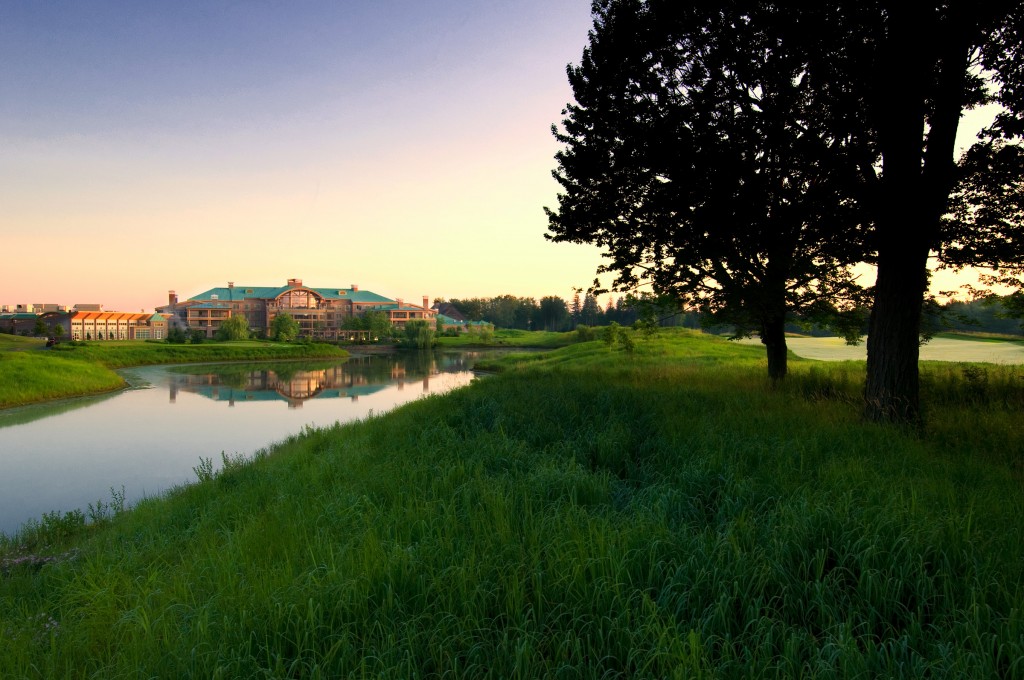 The Lodge at Turning Stone

I’m recently back from the Turning Stone Resort Casino in central New York about midway between Utica and Syracuse. I’ll have more to say about this pleasure palace soon, but if there’s a better recreational destination in the northeast it eludes me at the moment.

Start with three top-notch 18-hole courses (plus two more nine-hole tracks), throw in a casino and I’m pretty much sold right there. But the more than 3,400-acre spread on Oneida Indian Nation land goes much further with luxury accommodations, spas, fitness centers, fine-dining options and big name entertainment (with a country music bent).

There is a weakness, and it takes a beer geek like me to discover it: the beer offerings here are barely adequate. Knowing I’d be in Saranac territory I was looking forward to trying either the White IPA or the new Session IPA, and had no luck with either. Given the tribal wariness about alcohol, this is all understandable; in the early years of its existence the resort was completely alcohol-free.

Robert “RT” Todd, the director of golf operations at Turning Stone told me of a great beer store nearby and said he’d take me there (I assume he meant Kraig’s Kegs in Oneida, about five miles from the resort), but we finished our round at the Kaluhyat course too late to make it. I stopped at the Hoosick St. Beverage Center in Troy on the way home to snag the White IPA.

Aside from Saranac Adirondack Lager and the Pale Ale, the real find at the resort was Ubu Ale from the Lake Placid Brewing Company–by way of Saranac (the Matt Brewing Company).

Named after a patron’s chocolate lab, the Ubu has been the flagship beer of the Lake Placid Pub & Brewery pretty much since its 1996 founding. (Co-founder Christopher Erickson put in some early brewing time at The Shed in Stowe, Vermont.) Expanding to a production brewery in Plattsburg in 2001 worked for a while, but demand still outstripped supply, so that brewery was closed in 2010. (The Pub remains.)

A partnership with Matt called the Lake Placid Craft Brewery Company now supplies all the bottled beers under the Lake Placid line. The Ubu Ale is called an English strong ale, and it’s no piker at 7% ABV, though it might pass for a strong American Brown Ale a la Dogfish Head’s Indian Brown Ale.

It’s a deep ruby ale, malt-accented with toasted grain and caramel aromas and flavors. There’s a bit of chocolate malt in the profile, and the Cluster and Willamette hops balance out the finish well.

Worth a pat on the head, and there’s a good back story, too. When Bill Clinton was still in the White House and Hillary pondering a senatorial run, some of her scouting interns stopped off at the pub and came under the Ubu Ale spell. They brought some back to the President, who promptly had an order put in for three cases of growlers to be served at a White House party. (The current President likes to party with beer, too–click here.)

The Saranac is the first I’ve had, but there are others out there either as year-round beers (Chainbreaker from Deschutes) or one-offs (Linchpin from Green Flash).

It’s a hybrid style, blending a Belgian Witbier with an IPA. The former is typically a light and zesty ale made with unmalted wheat, possibly some oats, orange zest and coriander but little hop character. IPAs, particularly American IPAs, seem to exist largely for their prominent hop character.

With the Saranac White IPA you therefore get pretty much what you can expect–the zest, coriander, wheat and oats are all there, as well as the tropical fruit quality of the Citra hop. The beer pours out a hazy yellow with a big white head. The question is then whether it seems like the best of two worlds or an uneasy mix.

As might be expected, I’m of two minds. Witbier is, for some reason, one of my less favorite styles, though I can certainly appreciate one to cut through my thirst on a hot day. Like most of the rest of the beer world these days, I’m a hophead and therefore a big IPA fan.

Yet Saranac White IPA works well for my Witbier brain, while failing to register in my IPA lobe. Served at cooler temperatures it’s a tart refresher, the zesty side of the beer predominating over the hops. It went nicely with a lunch of leftover pork tenderloin.

Left to warm up a bit the aroma went a bit metallic on me and the overall impression became more strident than felicitous. Better suited, methinks, for the hotter months, and July certainly qualifies. So I managed to summon up the proper neurological balance, and finished it right off, of course.

One Response to “TAP Beer(s) of the Week: Saranac White IPA and Ubu Ale”