I’m told it’s a free country, and you can basically do whatever you want, so there’s no reason to listen to me when it comes to drinking your beer. Have at it anyway you like. However, if you’re looking to enhance your drinking experience, the following suggestions might help. 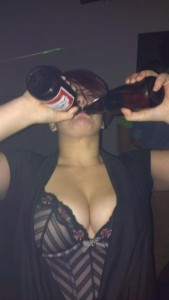 Basic Beer Imbibing #1: Never drink beer out of the bottle. It may look Urban Cowboy cool (or not), but you’re missing an awful lot of the beer drinking experience by not pouring it into a glass. Start with the color and foamy appearance of the brew, the way it comes alive when you pour it into a glass. (Which also releases some of the gases that will otherwise tumble and bloat in your stomach.) A glass will also give you the full aromatic experience of the beer, mostly lost in trying to sniff a bottleneck, which looks a little funky besides. And that goes double for cans.

Think of it this way–would you order a fine cabernet and swill it out of the bottle? Does a fine beer deserve any less respect and appreciation? 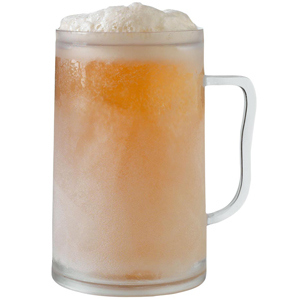 Down with frosted mugs! Maybe mugs altogether–tulip-shaped glasses tend to be the best beer-drinking vessels.

Basic Beer Imbibing #2: Make sure your glass isn’t frosted or frozen. Contrary to mass market advertising, the coldest beer in town isn’t really a worthwhile goal. Beer that is too cold is masking its flavor. (Okay, with some mass market beers that might be a sensible achievement.)

Different beers are actually best drunk at different temperatures. And while the color of a beer can be misleading in other ways (darker beers are not necessarily stronger, for example), it’s a reasonable guide to serving temperatures. Generally speaking, pilsners, wheat beers or lighter ales should be cold, but only about 40 to 45 degrees, not at an arctic chill.

Pale ales, amber ales and many darker beers should merely be cool, 45 to 54 degrees or so. India pale ales, Belgian strong ales, Scotch ales could go as high as 57, while barleywines, Imperial stouts, doppelbocks could be served at up to 61 degrees.

I’ve taken to heading off having beer served in ice-encrusted glassware by requesting non-frosted ones to begin with. Yes, I get a few strange looks from the wait staff. I can deal with it. Ice cream sodas are good in a frosted glass. Not beer.

Basic Beer Imbibing #3: Take your time. Assuming your college beer-chugging days are behind you, what’s the rush? A good beer, and particularly a good strong beer, will be one to savor for the short period it is part of your life. Once you’ve poured it out of the bottle and into your non-frosted glass, spend a few useful moments to ponder it–its sight, its smell and, some say, its sound. (Well, it’s mostly writer Fred Eckhardt who says that.)

Linger with a beer long enough and it will change character before you even empty the glass, as it warms, as it reacts to food you may be eating, or to your own changing mood.

I’m not advocating obsessive attention to one’s beer here, although there’s a time and a place for that, too. I am urging at least a beat of awareness, an appreciation for the small natural miracle in front of you. Almost enough to want to raise your glass in a toast, isn’t it? 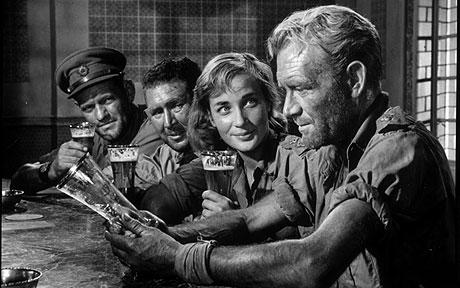 John Mills and cast of “Ice Cold in Alex” or “Desert Attack” in the U.S.

In different form this material first appeared in the September 5, 2012 issue of The Commons, an independent non-profit weekly newspaper covering Brattleboro and the towns of Windham County, Vermont.