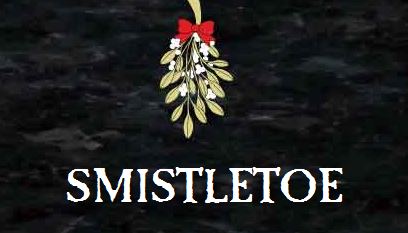 If you hung a bottle of Smistletoe from the ceiling and stood under it, would any kissing ensue? The beer only debuted last year, so it may not be part of anyone’s holiday osculation traditions yet. Just an idea.

The beer made its 2014 bow in a dark, corked bottle. This year it’s in an all-white capped bomber. But the idea is the same—a holiday brew with sweet cherries, black currants, plums, aged on lightly toasted American oak chips with a Saison yeast and Sterling hops. 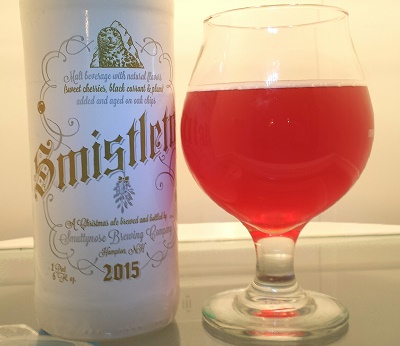 If our last brew looked red (the AleSmith Double Red IPA), this one is closer to pink. It looks like a rose wine. And the nose is, indeed, vinous, with notes of cherry, apple, some oak deep in the background. As it warmed up a bit some clove came through. The brewery calls it a “festive take on Bière de Garde” but I detect not a trace of any barnyard funkiness that is sometime prone to the style. The new Smuttynose brewhouse is probably too clean.

Like the 20-year-old AleSmith, the 21-year-old Smuttynose had outgrown its former production facility, which it referred to as the world’s largest home brewery. So as long as it was moving from Portsmouth, New Hampshire and building a new one, why not include a tasting room and restaurant, and a place for the orchard and hop vines and beehives and nine-hole disc golf course….

I haven’t yet been to the new location in Hampton, but I hear it’s a stunner, with generous and reasonably-priced samples of old favorites (the Finestkind and Bouncy House IPAs have come under our gaze), rarities in the Smuttlabs series, and the come and go seasonals like Smistletoe.

Or the Winter Ale, a 7.5% ABV brew masquerading as a strong amber brew, when its abbey ale yeast, and use of dark candi sugar puts it in a Belgian Dubbel territory. The spicy Sterling hops are also featured here. I confessed to sneaking in one of these last week, and I have no regrets. The dance card may already be full, but that shouldn’t stop anyone else from penciling in the Winter Ale, which may be more available than the limited release Smistletoe.

The Smistletoe is a completely different animal. At first I thought we were back in the land of shandys. The immediate impression is of a fruit juice-laden cooler (and indeed the label calls this a “malt beverage with natural flavors”). But the beer, or beverage, begins to reveal a little more depth as you go along. If the entry is too aggressively sweet for me, there’s nonetheless some heft to the mouth feel, a playful complexity to the fruit flavors, a nice overall tartness and a lingering oak tang that will have you running your tongue over your teeth.

In short, it grew on me, and certainly seemed like a viable shot at something festive indeed for the season. Kissing remains optional, but recommended.