[Apr. 20, 2013] I’m heading to Maui for a five-day Golf Road Warrior extravaganza, as described here. And I’ll try to up the ante to do a TAP Beer of the Day during the visit, heavy on the Maui Brewing Co. brews.

Might as well warm up with this one, however, chosen for obvious reasons.

I was in Sea Island, Georgia in late October for the finish of the McGladrey Classic, as Jim Furyk and Davis Love III failed to catch Tommy “Two Gloves” Gainey, who had seized the day with a sizzling final round 60.

Gainey was awkward but ingratiating in his first PGA Tour win trophy presentation. By the time the private Champion’s Toast rolled around in the clubhouse he had turned on his own southern charm, although he briefly held up proceedings until his beer arrived, a Miller 64. All the pictures I have of him look like product placements. 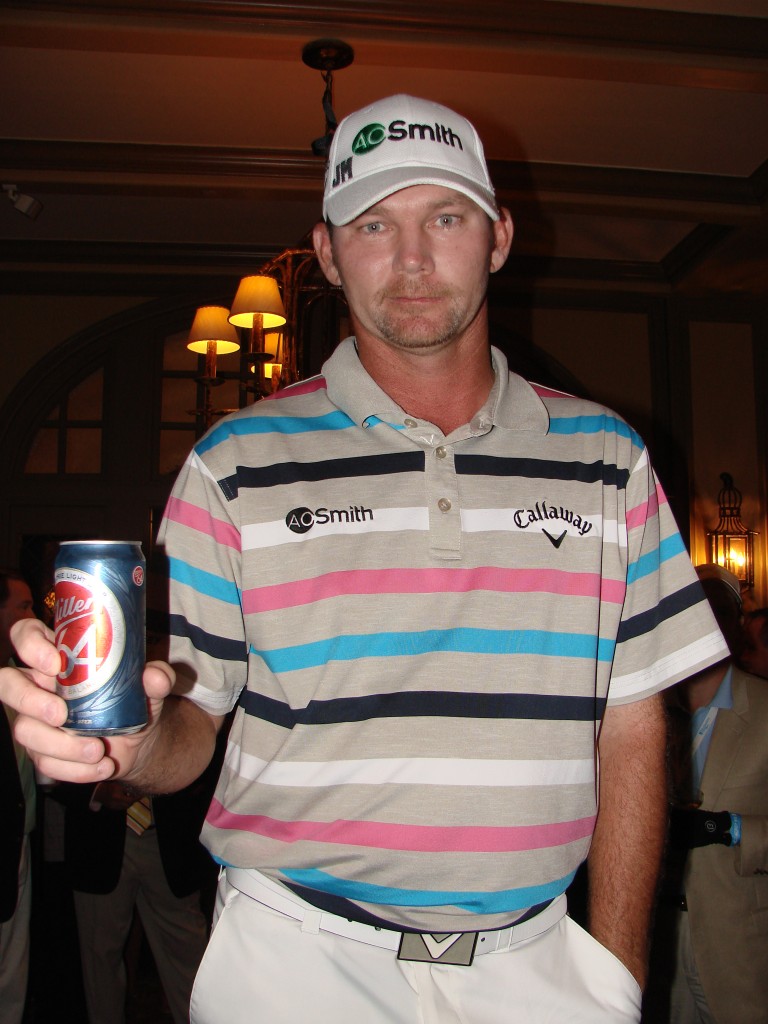 Tommy “Two Gloves” Gainey and his victory beer of choice

Cheers to Gainey for his victory, but I certainly can’t endorse Miller 64, which barely deserves the designation of near-beer. It vies with Budweiser Select 55 for the dubious Most Watery Beer title.

Luckily, for anyone in six southeastern states, there’s plenty of SweetWater 420 on hand. The Atlanta-based brewery must get tired of answering questions about the beer’s name. As I snuck in one more at the Atlanta airport before heading home a server told me it was a doper’s term.

There’s some truth to this, although there are various stories that swirl about. Some say the 420 moniker came about because a police radio call of 420 means a drug bust. There’s actually no truth to this whatsoever.

Another version suggests the term arose from kids deciding 4:20 p.m. is the best time of day to smoke, since school is out, the folks aren’t home yet, the coast is clear. And out of all this arose (or is still in the process of arising) the notion that 4/20 is now an undeclared National Weed Day, or a good day to smoke ‘em if you got ‘em.

An actual glance at the beer label logo suggests it might have been named after route 420, an interstate connector near Atlanta that was never built.

Well, take it any way you like, but the April 20 date is actually significant—it was the day the beer was first brewed in 1997, two months after the brewery officially opened.

It’s still the flagship brew, called a west coast-style pale ale, though I found it less hop aggressive than my conception of a left coast beer. Lightly copper in the glass, the beer’s nose is more bready and malt-accented than hoppy/flowery, though it’s nicely dry in the finish, a crisp and refreshing brew overall.

While I didn’t actually get to hoist one with him, I suspect SweetWater 420 is a brew even Tommy Gainey might like to get his gloves on.