My good friend Ace Schmidt (the golfer formerly known as Ed (long story)) wondered today on the social interwebs (where his other alias is the Golf Travel Guru) how I had time to write the 12 Beers of Christmas when there’s, “… all that gift wrapping. Poor elves must be working some serious overtime.”

Well, yes, if by poor elves we mean my wife, who has indeed been wrapping up a storm with decorative aplomb. That she does this while I’m semi-reclined on the couch sipping beer and typing away and doesn’t impale me with a pair of scissors is further proof she’s on the road to sainthood.

But Ace makes a point about the time, and at the halfway point of the annual quest I needed a bit of a break. Hey, I had a busy day, meeting up for a lunch with the usual foursome (our alias being the MOTO Research Team), doing a few chores, and picking up the Christmas tree, which can be espied between bottle and glass in the picture below. 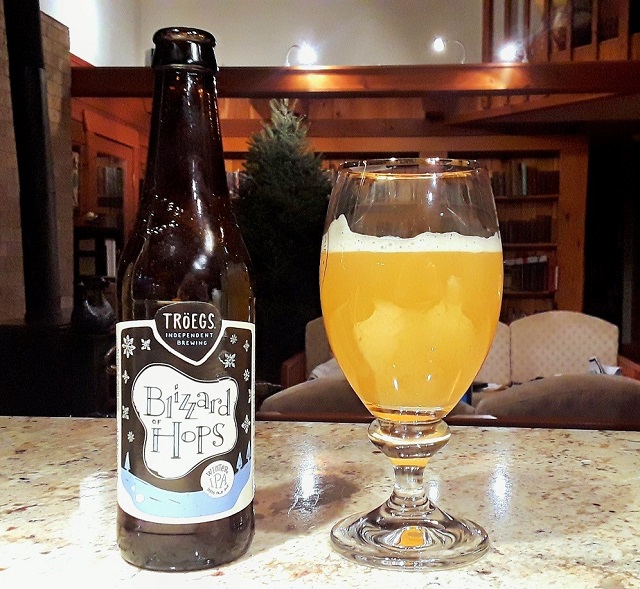 Call me lazy, but I figured a “Winter IPA” wouldn’t put me through the wringer, and it didn’t. I suppose I could accuse Troëg’s of a bit of laziness, too. I mean, there’s really nothing “wintry” about this beer other than slapping on its tag as a Winter IPA and releasing it seasonally. 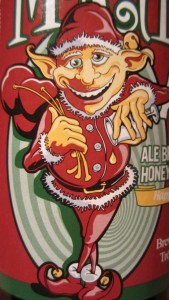 But I won’t, because Troëg’s also makes a quintessential Christmas ale, Mad Elf, which made the list in 2013 and is not to be missed.

I’ve reviewed a number of Troëg’s beers through the years and the Hershey, Pennsylvania brewery is always a good bet. I don’t think Blizzard of Hops is any kind of a threat to the brewery’s best-selling Perpetual IPA, but it’s part of a four-beer yearly seasonal lineup called Hop Cycle.

Swirling in this particular blizzard of bittering hops are Centennial, Chinook and El Dorado, while Chinook and Galaxy were using in dry-hopping. When it all settles down it’s a lemon- to orange-hued brew with a lively white head, hazy (sort of a not-quite-a-New-England-IPA), with fruity hop aromas storming out of the glass.

My poor elf and I both tasted the beer and she picked up lemon in the nose and pineapple on the palate; I thought the aroma was more in the tropical fruit and mango range. The Galaxy hops would account for any of these sensations.

There’s a certain dank and doughy quality to the beer that puts me off a little—actually, quite a bit like other NE IPAs I’ve had lately—but I quite like the subtly delayed but lingering bitter finish. Which is not like a NE IPA. In the end, it’s a bit of a puzzler, a little like trying to figure out the difference between sleet and freezing rain.

So, a solid enough blizzard of hops. If not one of my favorites, I can easily imagine this would be right in other IPA lovers’ wheelhouse. Your move.