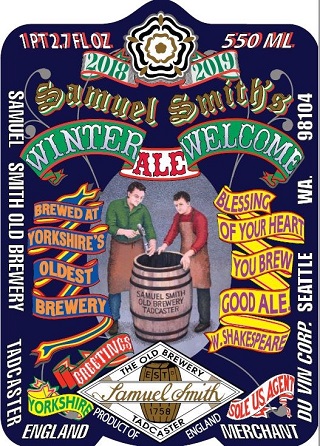 “Blessing of your heart, you brew good ale,” it says right on the label of the Samuel Smith Winter Welcome. And it couldn’t be more apt since the quote is from Shakespeare, and I shared the beer tonight with fellow readers at our regular Shakespeare group. We all liked it.

We were reading Henry VI, Part I, not Two Gentlemen of Verona, where the quote can be found in the first scene of Act III. But no matter—a more English play for a distinctly English ale.

Shakespeare is no slouch when it comes to mentions of beer in his works. Two of the more familiar:

“Would I were in an alehouse in London! I would give all my fame for a pot of ale and safety.” —Henry V
“For a quart of ale is a dish for a king.” —The Winter’s Tale 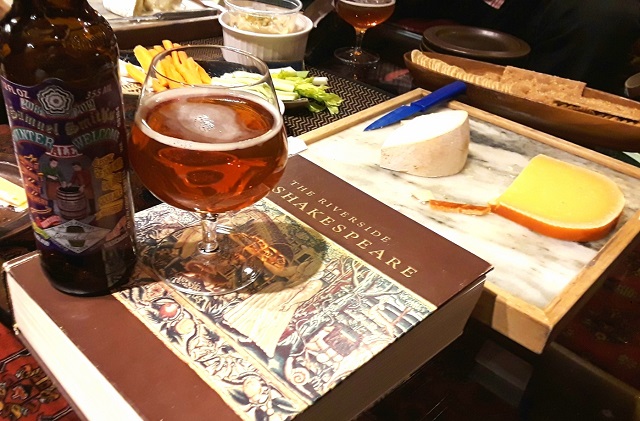 Some of our Shakespearean spread

We’d best not go down the rabbit hole that is Shakespeare, however, lest we be here for centuries. I will give one short plug for a most excellent new book about the bard, however, for anyone looking for a last minute gift. Stephen Greenblatt’s Tyrant: Shakespeare on Politics, would be ideal for anyone interested in either Shakespeare or our current political state of affairs. 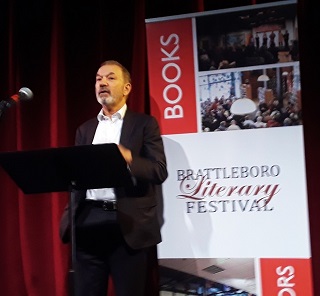 Greenblatt, the John Cogan University Professor of the Humanities at Harvard University, is also the author of the delightful, somewhat speculative analysis of Shakespeare’s life, Will in the World. We were lucky to have him appear at the Brattleboro Literary Festival this year.

In Tyrant he manages, in a brisk 200 pages, to skewer a certain very stable genius of a politician without once mentioning his name. It’s a brilliant and entertaining piece of work and, should you down too many Winter Welcomes, quite sobering.

Back to the beer. Why I haven’t touted this one before is a bit of a mystery, because it’s a real delight, almost as much a classic as the Samichlaus we had a few days ago. Winter Welcome has been shipped to the U.S. from Yorkshire since 1990, but it’s been awhile since I’ve had it. That will be changing.

Some of the history of the brewery and its dogged continuing use of open Yorkshire square stone fermenters are in this review from a few years back of its Yorkshire Stingo.

Like Anchor Brewing, Samuel Smith changes the label of its winter beer each year, and as this is the first time kegs of Winter Welcome have been sent to some U.S. markets, brewery cooper David and apprentice Dylan are shown working on the oak kegs still used in England for the brewery’s cask Pale Ale. Here’s what they really look like: 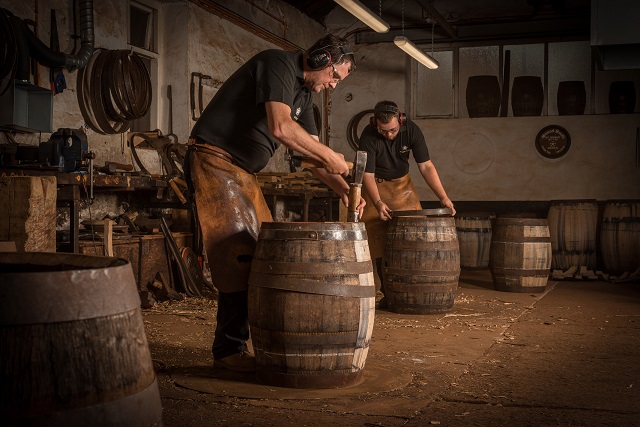 Winter Welcome is a lovely, clear, deep copper beer, with rich caramel and toffee aromas and a slight winey, oak-like character. There’s a smooth, velvety mouthfeel, along with the toasty malt-accented character of the beer, but it’s never too sweet. There are some dark fruity notes, some spiciness and those suggestions of oak from the Fuggles and Goldings hops. A crisp, almost succulent bitter finish ties the beer up in a bow like the English Christmas present it is.

It’s no small beer, which we know would please Bill Shakespeare.