Stumbled into a bit of cosmic unconsciousness recently, and anyone who has seen the 1984 film “Repo Man” knows what I’m talking about. In the film the strange character Miller, played by Tracey Walter, explains to Otto (Emilio Estevez) about the “lattice o’ coincidence that lays on top o’ everything.” He illustrates it thusly: 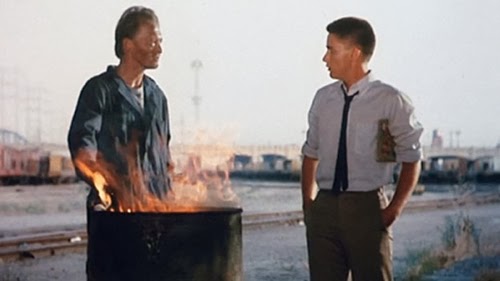 Suppose you’re thinkin’ about a plate o’ shrimp. Suddenly someone’ll say, like, plate, or shrimp, or plate o’ shrimp out of the blue, no explanation. No point in lookin’ for one, either. It’s all part of a cosmic unconsciousness.

So I was on a Golf Road Warriors trip to Fort Myers recently where—while eating a plate of shrimp, incidentally—we talked about the atmospheric refractive phenomenon of the green flash, and I was thinking it would have been nice if the beer menu had something from the Green Flash Brewing Company. Which it did not, and I wrote just that in a post on Bell’s Oberon Ale.

This was in late April. Shortly after I returned home a bundle arrived—out of the blue—from the Green Flash Brewing Company, a bunch o’ their beers. There was an explanation: introduction of a new beer, new labeling for the entire line, extended national reach.

And the name of the new beer? Road Warrior.

Okay. No point in fighting it, either. I began agreeably working my way through the lineup, as long as I was in the mood for strong, hoppy beers. There was the West Coast Double IPA (8.1% ABV), Hop Head Red Double IPA (8.1%), Double Stout (8.8%), and the Road Warrior, an Imperial Rye India Pale Ale clocking in at 9%.

Another of their popular beers, an Imperial IPA of 9.5%, is called Palate Wrecker, which might be the effect if one made a steady diet of these brews.

Alcoholism might be another, if attention is not paid. These are all strong beers, but alarmingly tasty. Timid Green Flash is not. As a summer seasonal, the Road Warrior barrels right over the mini-trend of summer session IPAs (or more accurately, lower-than-has-lately-been-normal-ABVs for IPAs). 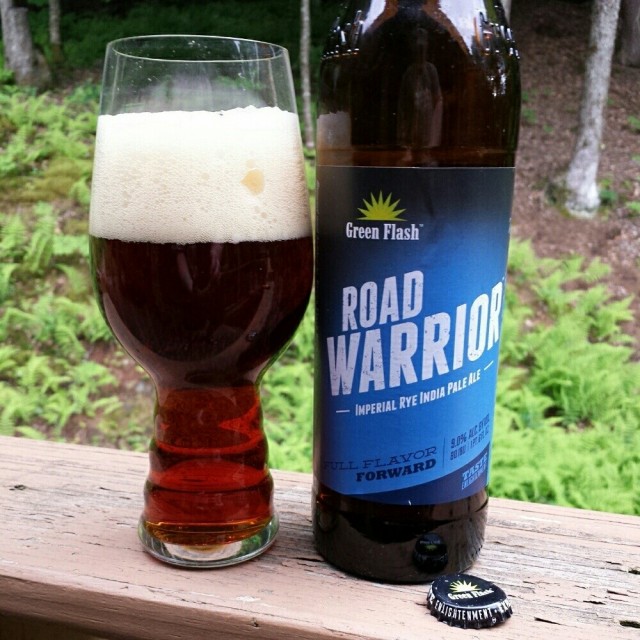 The name has nothing to do with golf, but everything to do with the company’s sales force, according to company CEO Mike Hinkley, who founded the company in 2002 with his wife, Lisa Hinkley. The beer was originally released as an Imperial Red Rye in a 2013 Hop Odyssey series and, “Ultimately, our sales team pushed for the beer to be produced on a larger scale. They are a convincing bunch so we had no choice but to listen. We named the beer Road Warrior… as a nod to the team’s tireless efforts.”

Since the company recently announced it would start selling in Hawaii, that leaves only Utah on the outs.

Brewmaster Chuck Silva said, “This is quite possibly the most amount of flavor that can be packed into a glass of red ale,” and he is quite possibly right. The beer pours a frothy reddish copper, and the nose immediately blossoms with a wild bouquet of flowery and fruity hoppiness, a touch of mown grass, so fresh it’s like stepping into a brewery’s hop storage room. Most of the credit here goes to the dry-hopping with Mosaic and Amarillo. The palate is simultaneously sweet and tangy, a chewy maltiness quickly tangling with the hop bite. (Mosaic and Columbus go into the brewkettle.) One 22-ounce bottle was a sufficient and pleasant night’s work for me.

I can’t say I’m blown over by the new label design for Green Flash, but it’s a vast improvement over the former look, which was downright discouraging as far as me picking up a bottle to try. As for why I would buy or not buy a beer simply on the look of the label there is no explanation. No point in lookin’ for one, either.

But if you like your beers hoppy, bitter and strong, Road Warrior might be the ride you’ve been waiting for. Just try to stay current with those car payments.