(July 5, 2010) With no fireworks at hand yesterday, I lit off a cherry bomb of a beer to celebrate the Fourth.

It was not an American beer, but Belgian. My habit of drinking imports on the most iconic American holiday stretches back to my younger drinking days, when there weren’t that many American beers around of any great interest. To try anything somewhat different, something with a little more impact than the typical watery lagers of the day, imports were the way to go.

I was taking beer hunting fairly seriously early on–the drinking age was still 18 then (I’m talking late ‘60s-early ‘70s in suburban New York). But there weren’t a lot of big finds to be found, beyond obscure German lagers. To unearth a dark beer was a coup; a Belgian oddity would have seemed like something from another planet. Still, before the Fourth I’d head to the local beer distributor and stock up on whatever was new and unfamiliar.

I was a lucky kid growing up. My family belonged to a pool club–five families split the expenses originally, though the number grew over the years. The luckiest part was that the pool was in our backyard. I learned to swim there, and spent many a Fourth right there: playing baseball or volleyball as the day went on, downing countless hamburgers, hot dogs, ears of corn, slices of watermelon, while swimming for hours, sunning, contracting skin cancer….

The wonder is I never lost an eye or went deaf or blew off a bodily appendage from all the fireworks we set off as evening fell on the Fourth. We put on major illegal fireworks displays in those days, all fueled by our day-long ingestion of fairly potent beery imports.

True, the odd bottle rocket would sometime go screeching into the assembled crowd, sending a few of the timid diving off their lawn chairs for cover. A patch of lawn might catch afire from time to time, but that only suggested another fine use for all that imported beer.

All was well as long as we followed the four-word mantra of the fireworks-obsessed: Light fuse, get away. Those were the concise instructions right on the pack of firecrackers, cherry bombs, ashcans, Roman candles, fountains, or whatever ordinance we were torching. Sometimes the translator of the Chinese (all the fireworks seemed to be Chinese) aimed at a slight literary note: Light fuse, retire quickly. Or the always helpful: Do not hold in hand after lighting.

Those Fourths were among the most thrilling and satisfying days of my life, and I think I say that without undue nostalgic haze.

This Fourth was a bit muted after my wife pulled a muscle (or something) in her back. Lynn and I were supposed to march in Brattleboro’s Fourth of July parade in support of Vermont gubernatorial candidate Peter Shumlin, but that as well as an evening party had to go by the boards.

But there was still the beer! If Belgian, the Kasteel Rouge is just about as American as cherry pie, since that’s pretty much what it tastes like. Well, a spiked cherry pie, anyway. 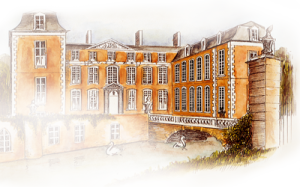 The brewery site in West Flanders was a monastery in 640, succeeded by an eleventh-century castle, and the present building, dating back to 1736 but maintaining the Middle Ages cellars. The Van Honsebrouck family bought the castle in 1986, and maintain an outdoor café and indoor beer cellar for those looking to try the various brewery lines–Kasteel, St. Louis, Brigand and Bacchus.

The Van Honsebroucks have brewed in Ingelmunster since 1900, giving them clear entry into the non-profit Belgian Family Brewers association, a group which requires that members have been brewing beer in Belgium non-stop for at least 50 years. Wetten Importers of Virginia distribute the Van Honsebrouck beers in the U.S.

The brewery suggests that the Rouge would pair well with barbecue, so that worked for the Fourth of July. It pours out garnet with a red-tinged head and is thankfully not overly sweet, but would surely serve as an aperitif or dessert beer, too. There’s a sophisticated swirl of flavor, spice and depth to the Rouge, but there’s no question that tart cherry dominates the experience. 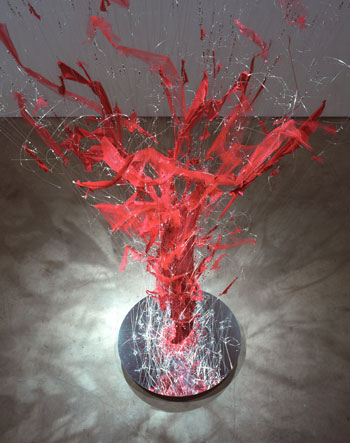 The base of the beer is Kasteel Donker, a brown ale of 11% ABV left to mature for six months on sour cherries, and then cherry juice is added as well, which probably accounts for lowering the ABV to 8%.

But at 8% ABV, this is no half-inch firecracker. Nonetheless, it was a hot day, it was the Fourth of July, so after I popped the cork and lit its proverbial fuse, I took great satisfaction in retiring the Rouge rather quickly.

Thanks to E.V. Day for use of Cherry Bomb Vortex, 2002, Red Sequin dress with monofilament and turnbuckles (192 x 240 x 240) in the Exploding Couture series.

5 Responses to “TAP Beer of the Week: Kasteel Rouge”