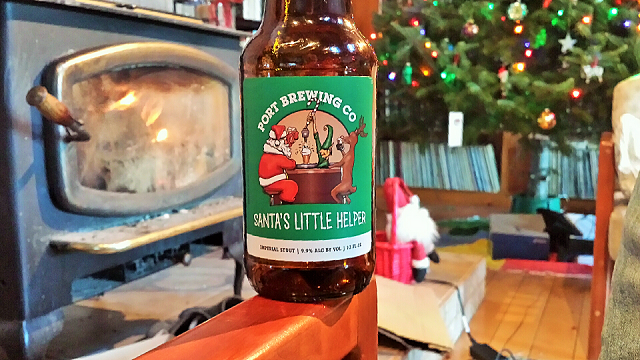 Here’s to a fortuitous 2018 for all! And on the eighth day of Christmas, a beer I’d originally intended for Christmas Eve—when Santa could use a little help—albeit he always seems to get the job done anyway.

Somehow the internal chaos here prevented any holiday beer being seriously tasted that night. The pandemonium was happy enough—greeting an influx of relatives, downing copious amounts of pizza, decorating the tree and, once finally stashing grandchildren into beds, stacking presents under it. There was the end of “It’s a Wonderful Life” to attend to, some last minute wrapping to be done, and then finally settling down for a short winter’s nap.

By Christmas dinner we were, as noted yesterday, ready for more, loaded for bear. By we I mean my familial tasting panel, who chimed in with sleigh full of impressions on this 10% ABV Imperial Stout: molasses, sugar cane syrup, brown licorice, dates, prunes, with a boozy aroma, chewy mouthfeel and a touch of sour pucker at the finish. 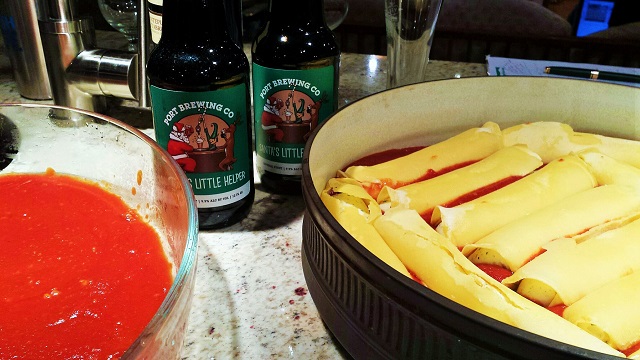 My son-in-law, barbecue restaurateur Glenn Brunetti, said, “It’s a straightforward brew in that there aren’t a lot of hidden characteristics; and it’s delicious.” Tautly put.

Lilah, at 11 my youngest grandchild, was the sole dissenter after she took a sip: “That’s worse than the one I had two years ago, the one that tasted like barf!” At her advanced age, or overcome by alcohol, her memory plays tricks on her. It was three years ago, when she was eight, and she described the Petrus Winter #9 Ale as tasting like “cinnamon and barf.”

Nate, at 17 my oldest grandchild, hasn’t developed a taste for beer, despite a recent semester in England. He wouldn’t even try it. I was never able to interest Nate in golf, either. All my influences seem to have gone for naught, although the poor, misguided young lad has expressed a desire to be a writer.

But why go on when Tomme Arthur himself can talk all about this beer and its summer cousin, which is the same beer but aged in bourbon barrels before its release in July? Meaning, more from the batch we just drank is even now conditioning away in barrels:

I’m not quite sure what he means by blacking out the Santa image, since it shows up in full color on my bottles, purchased in Massachusetts. In any case, beer geeks need no introduction to Arthur, a craft brewery superstar. If bedecked like a general with all his ribbons and medals Arthur would likely be too weighed down to walk, or at least need a good deal of assistance from Santa and an elf or two.

His 20-plus year career, all spent in his native San Diego, has made stops at Cervecerias La Cruda (now closed), Pizza Port in Solana Beach and then Port Brewing/The Lost Abbey in 2006.

There’s always a bit of confusion about all this, which is why the Port Brewing website tries to deconstruct it. In short, Pizza Port is a distinct operation, though Port Brewing is an offshoot with some of the same principals.

Port and Lost Abbey are under the same roof, but the latter concentrates on Belgian-style barrel-aged specialties (stay tuned) and they’re not afraid of the funk. The motto over the barrel room is “In Illa Brettanomyces Nos Fides” which roughly translated, means “We believe in wild yeast.”

I was lucky enough to wander through the barrel room about eight years ago, and stare agog at the offerings at the tasting room bar. Arthur wasn’t there, though his visage oversaw all: 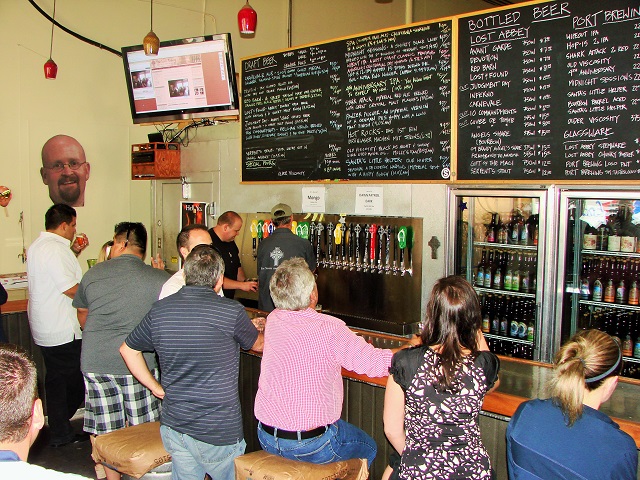