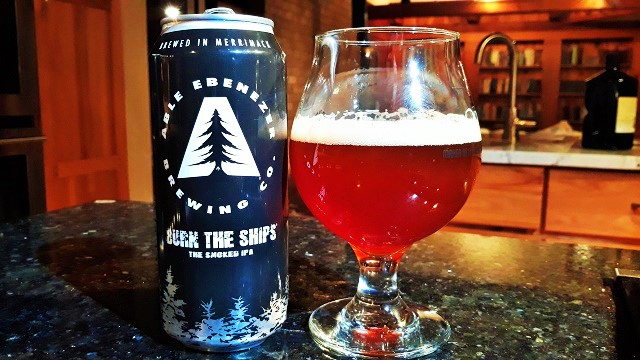 It’s good to have friends, especially friends with daughters who seem to know you’re into beer, and who visit your friend (their mother) at Christmas time and leave a beer for you to try in your mailbox. Bedecked with a ribbon no less. 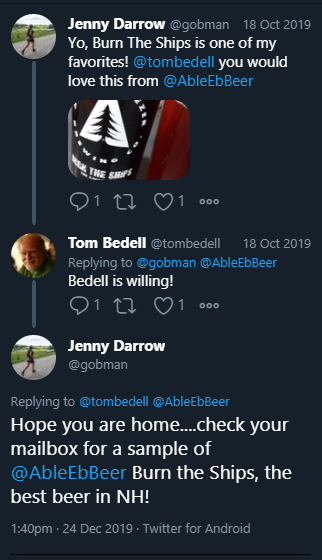 So thanks, Jenny Darrow, for leaving the offering of Burn the Ships from the Able Ebenezer Brewing Co., and for alerting me to its delivery via Twitter. (So I could run down and retrieve it before we ran afoul of the postal authorities.) I was aware of neither the beer nor the brewery, but Jenny gave it a pretty big buildup—when I went into the Twitter archives I realized she’d first alerted me about it in October:

For living in Vermont, I’m pretty untutored about New Hampshire beers. Most don’t seem to make it west across the Connecticut River, and there’s more than enough effort required to try and keep up with the Vermont beer onslaught. Maybe I haven’t been trying hard enough. Burn the Ships was certainly titillating enough to suggest keeping my eyes open for Able Ebenezer’s brews.

The brewery opened in 2014, started by Carl Soderberg and Mike Frizzelle, Army veterans now in their mid-30s, who met while serving at Fort Bliss in Texas. Carl is from Maryland, Mike from California, and somehow the brewery wound up in Merrimack. The partners make much of the Live Free or Die concept of the state, and indeed lean on state history for the brewery name:

Ebenezer Mudgett was an ale and spirits merchant successful enough to branch into logging, so to speak, and in 1772 he and other loggers from Weare ran afoul of the British, who were claiming all white pine trees greater than 12 inches in diameter to be used for their shipbuilding. It was either give over the wood or face heavy fines. Ebenezer, who considered himself Able for the task, refused to pay the fines, as did other loggers in the area. 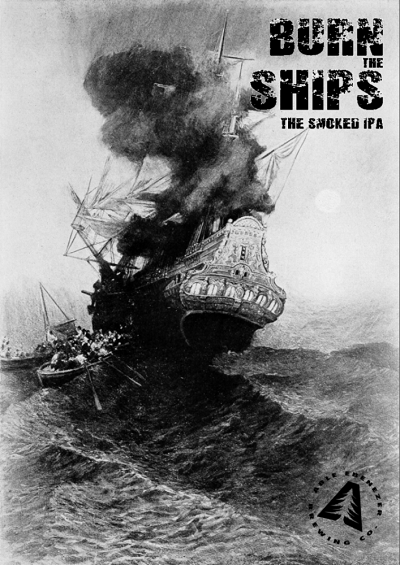 Warrants were sworn out for their arrest and a posse raised. But before the resisters could be rounded up they blackened their faces and stormed the inn where the deputies were, dragged them from the inn and rode them out of town. What became known as the Pine Tree Riot served as an inspiration for the Boston Tea Party and other acts of civil disobedience in pre-Revolutionary days. And the pine tree wound up as the Able Ebenezer logo.

There’s plenty more of the story on the brewery’s website. Both partners are history buffs, and Soderberg loves to write. There are six installments in the Burn the Ship series alone, detailing the act of burning ships as a military tactic throughout history.

According to Frizzelle, whom I spoke to a few days ago, Burn the Ships was something of an inside joke for the pair, basically suggesting the thought of no retreat. He said, “In terms of the brewery, it means this has to work because we put everything into it.”

But it also plays into the character of the ale, which uses smoked malt. 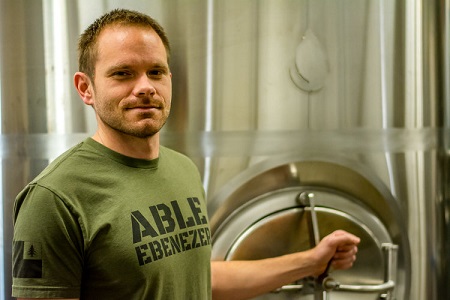 “By the smell alone we knew it was way too much smoked malt. But by the eighth or ninth time we got it right.”

They did, the key being to find a balance between the brawnier qualities of the smoked malt with the sweetness of crystal malt and tying it all together with enough hop character to keep it in the IPA realm. A clear light mahogany in the glass with a reddish tinge, the hint of smoke in the nose is undeniable, but hardly overpowering, and I would think approachable even by those who shy away from smoked beers.

I tend to be a fan, and actually would have preferred a slightly heavier hand in that regard. But there’s still a nice earthy, woody character to the beer, yet with a nice Cascade hop citrus quality lingering as well. I won’t claim it’s the best beer in New Hampshire, but it’s unique and enjoyable.

The partners originally thought a red ale (Auburn) would be their flagship brew. But it turns out that Burn the Ships is the beer that’s paying most of the Able Ebenezer bills, along with the 8% Double IPA Victory Nor Defeat, the two beers it currently cans for its retail presence. Most of the dozen beers currently in the portfolio are served on draft at the brewery’s Tap Room, or in local restaurants and pubs.

Able Ebenezer self-distributes, albeit only in southern New Hampshire at the moment; there’s only so much beer to go around. The brewery was one barrel shy of producing 1,300 in 2019. For 2020, no retreat is anticipated.