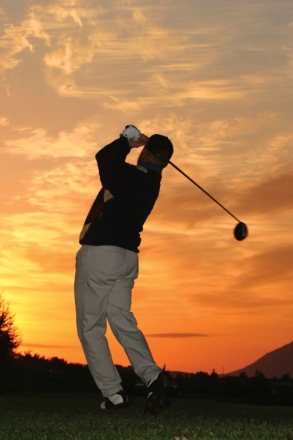 June 17 is not particularly better known in these parts as Iceland Independence Day, but that shouldn’t stop us from celebrating. One could hope to be at this year’s Arctic Open, but in lieu of that, and in the absence of the Viking Beer mentioned below, one could crack open a bottle of Lava Smoked Imperial Stout.

I’ve updated general facts in this piece, but not the individual professional or personal relationships, which remain captured, frozen if you prefer, in 1997 time:

There are no trees in Iceland. Or so I had been led to believe, and for a golfer used to tramping deep into Vermont woods tracking errant shots, this was tantalizing. I knew the Iceland-is-green-Greenland-is-ice adage, and expected plenty of rolling grassland, along with volcanic rock and glacial tundra when I visited in mid-June, and so it was: Touching down in Keflavík and shuttling a half-hour or so to Iceland’s capital city of Reykjavík revealed little beyond craggy fields stubbled with lichen, flocks of purple lupines the only sign of spring color. On the hour flight north to Akureyri–more a glacier than puddle jumper–the view was black and white, lava and ice.

At home my golf game had been heading south. The cure, as I saw it, was to trek north for the two-day Arctic Open Golf Tournament in Akureyri. Then I stepped to the first tee and stroked a beauty that rocketed thirty yards into deep, craggy, lichen-stubbled rough.

The Icelandic word for “mulligan” is “mulligan,” but they aren’t allowed in tournaments. I slashed my second shot smartly out of the rough, and it promptly caromed off the only tree in Iceland. It was a spindly little thing, too. The dexterous lack of talent and bad luck required to hit it startled me so, I proceeded to play in a befuddled arctic haze, as though I’d gone all the way to the North Pole and was completely directionless. I shot a 61.

Two pints of Viking (the potent local lager) later, I managed a 49, just missing a hole-in-one on the par-3 eighteenth, meaning I would have won a Volkswagen Polo and fainted dead away. Instead I missed the putt, settled for par, a 110 in all, my worst round of the year. 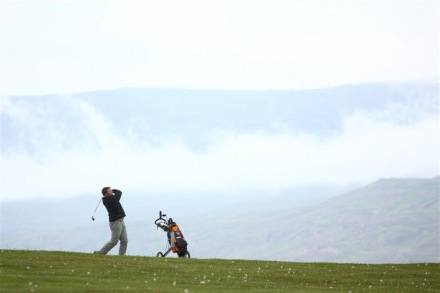 But it was also my best round of the year. How could it have been otherwise?: It was clear, though in the 40’s, due to a breeze from the north, right off the very visible Eyjafjördur, the largest fjord in Iceland. Eyjafjördur opens into the Arctic Ocean; I was a mere sixty miles south of the Arctic Circle, launching golf shots into the crisp evening air, surrounded by snowy slate-colored mountains, sheep and horse farms, an immense sky with ever-shifting and roiling clouds. I had teed off in the bright sunlight of 8:24 p.m., and was still swatting golf balls during the flaming phenomenon of the midnight sun. It was intoxicating. Maybe that’s why I was putting so poorly.

My partners were Edgar and Catherine Peng of Zurich, Switzerland, and Hörður Þorleifsson, an Akureyri dentist. Hörður said, “Your English word ‘green’ sounds like the Icelandic, ‘jrin.’ Which means ‘joke.’” He may have been characterizing my stroke, but the greens were in tough shape, patchy and rock hard, following uncharacteristically heavy June snow.

During the summer solstice period, there are basically 24 hours of daylight in Iceland and no bedroom is without heavy curtains. This is a fortunate lighting arrangement in a country with a 16-week golf season at best, and but two months when the courses are in top shape. Iceland had just under 60 courses at the last imprecise count, some of them beauties, and I did my best–126 holes on four courses in seven days.

Almost half of Iceland’s 317,000 population lives southwest, in Reykjavík. (The entire island country is about the size of Virginia.) Akureyri is Iceland’s second largest urban center, inhabited by 17,000 hardy northern souls. The Akureyri Golf Club was founded in 1936 (second to the Reykjavík Golf Club, in 1935), but the present nines date from 1970 and 1981, meandering over a former farm with its canal-like ditches (skurdurs) still in play. This Venice of golf courses is a links-like layout, only 6,322 yards, but with plenty of topographical quirks, and opportunity for the unexpected: I was about to tee off on the fourth hole early one morning when a herd of Icelandic horses went thundering by. 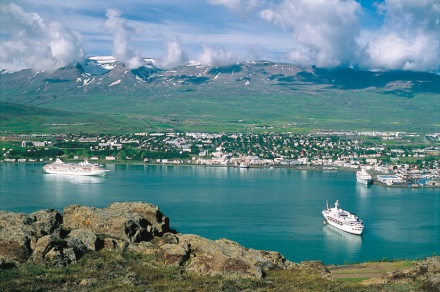 The Open is limited to handicaps of 24 for men, 28 for women, but no one appears to be checking closely. Though excellent golfers compete, the tournament also has a history of ineptitude clinging to it. In 1993, Louise Wakeman, a Connecticut grandmother, shot 164 on consecutive nights. She was so pleased, she painted a picture of the clubhouse–where the painting now hangs. In 1996, U.S. reporter Ron Rudolph, perhaps smarting from too many reindeer jokes, shot a 144 for one round. Jeff Hull, another U.S. writer, was worried he might better this disaster–or, at any rate, surpass it. 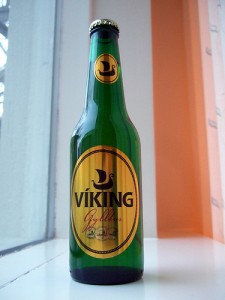 The Vikings never had it so good

We finished our round after 2 in the morning, then sipped restoratives and feasted on rumors. One had Jack Nicklaus further north, salmon fishing, something he often does in Iceland. But he wasn’t. Another was that Jeff Hull had shot a 110–for the first nine holes.

The fourteenth green or fifteenth tee, or the eighth tee, were the places to be for the most mesmerizing effects of midnight, with elevated views north. The sun appeared to dip right into the Eyjafjördur, flooding the valley with fiery hues and shadows that further complicated play. Club member Egill Áskelsson had once played with a six-foot six golfer: “At midnight, he cast a shadow from the fourteenth tee all the way to the green,” a 190-yard stretch.

The clubhouse became the crucible for tales of joy and woe. Many others had come close to nailing the Volkswagen Polo–their shots veered so far right they just missed hitting the car itself. Egill recalled the golfer who in a particularly frigid Open, had only 40 or 50 meters to go when he lost it: “He was so cold he used his putter all the way home. ‘What are you doing?’ I asked him. All he would say was: ‘I don’t care.’”

After the opening night rounds about 20 players took four clubs each and wandered out to the course for a wild and well-lubricated scramble that finally tumbled to a close about 6 a.m. I believe my team won, thanks to a birdie putt I made on the last hole, and that’s why someone bought me a hot dog. But I wouldn’t swear to any of it.

Golf Around the Clock All Night 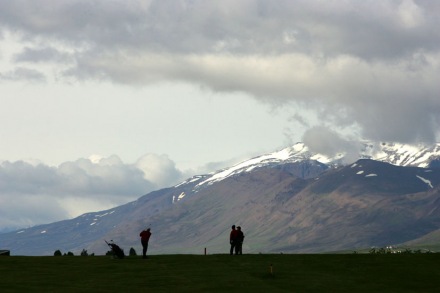 The Pengs, Hörður and I decided to play together again in the second round, but we teed off earlier–at 4 p.m.–under threatening skies. We played through some rain, but mainly a warm southerly wind, howling so fiercely at times it was like hitting shots through water. On the eighth hole, I foozled a drive smack into the only other tree in Iceland.

But I had my moments. On the sixteenth hole, I whacked a nice drive, then landed a perfect 7-wood on the green, before holing out for par.

“You’re an artist,” Edgar said. A 50-44-94 was more to my norm. My golf demons had fled into Edgar, coming down with a cold and having his troubles. But he was philosophical: “I’m glad I don’t have to earn my living playing golf. Though maybe I could be a golf clown.”

Well after midnight I went out with golf writer Alex Miceli to tee it up some more, before we turned to spectating. Shortly after 5 a.m. the Twelfth Arctic Open was official: Örn Arnarson won with a 4-over-par total of 146. By then my clock was totally screwed up–I went to bed at 9 a.m., and rose at 4 p.m., barely in time for the closing cocktail party and dinner.

About a third of the 140 Open participants were from abroad, and the varied cultures mixed gleefully. The two rounds of golf were sandwiched between opening and closing banquets, worthy displays for the Icelandic love of long stories and traditional foods, such as the eye-opening pairing of hákarl, a cured shark meat that reeks of ammonia and tastes like the cure is incomplete, best washed down by an Icelandic schnapps called brennivín, fondly known as the black death. It rendered the general equation for the tournament sensible–show up for four days, and sleep about four hours. When the clubhouse emptied after the last night, it was to stream back to town for more revelry.

While reviving slightly in my hotel room I decided I could carouse anywhere. So I took a cab back out to the course at 3 a.m., just as Alex Miceli was arriving in another. We had a lot of Icelandic real estate all to ourselves. We played nine, and then assessed the situation: We were alone, it was too far to walk back to town, the clubhouse was locked so there was there was no way to get at a phone. We couldn’t sit there and watch the sun come up, because it had never gone down.

“I guess we might as well play some more golf,” I said.

“I think it’s the right thing to do,” said Alex.

It surely was, even though I started off with a 9 and never recovered, losing 800 króna, and owing Alex breakfast. That didn’t matter. What mattered was we roamed up and down the solitary fairways like the last two men on earth, doing what the last two men on earth would surely do. It was sunny and mild. Except for the cries of birds and our usual golfing bellows, it was silent as the dawn of time. It was about what could be expected of golfing in Iceland in the indeterminate morning: unearthly, and beautiful. 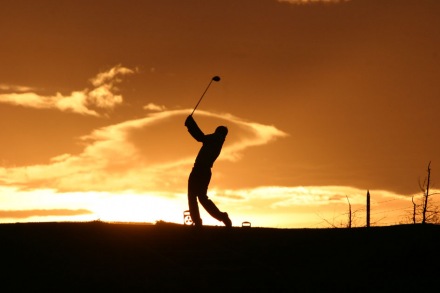 2 Responses to “Iceland Golf: Have You Driven A Fjord Lately?”