So I missed by a day.

And what’s in a name, anyway? The beers are brewed well in advance of the release date. And the notion that on 12.12.12 there could be a bang-up vertical tasting of each release in the series is a little shaky, since vertical tastings (as the term comes to us from the wine world) technically implies sampling different vintages of the same beer. (A horizontal tasting implies the same vintage year of a beverage type, but from different producers.) But every beer in the Stone Vertical Epic series has been different, with different ingredients.

Stone seemingly recognizes the anomaly, since the typically chatty label prose, in suggesting a tasting of all eleven chapters in the series in 2012, puts the “vertical” in quotes.

But what the heck, it’s still fun to imagine working through eleven bottles of distinct, high-octane beers towards the end of 2012, and beginning 2013 with an epic hangover, if more likely to be horizontal than vertical at the time.

I could hope to catch up by then, anyway, but it’s a faint hope. Only 300 cases of the 02.02.02 were brewed, and one is now more likely to bring a Chilean miner to the surface than one of these vintages.

The limited release bottles tend to vanish almost as soon as they appear on store shelves, so availability is haphazard. I gather I was lucky to find the 09, fairly recently, which is also the first of the VE series I’ve actually tried.

Maybe I can put my nephew Doug, on the case. He knows Stone chairman and CEO Greg Koch somewhat, having run into him most recently at a 10.4.10 epic event at the ChurchKey beer mecca in Washington, D.C.–Stone’s Total Tap Tower Takeover Two Thousand and Ten. Stone beers were flowing from 40 taps, which could have made for a long night’s work. 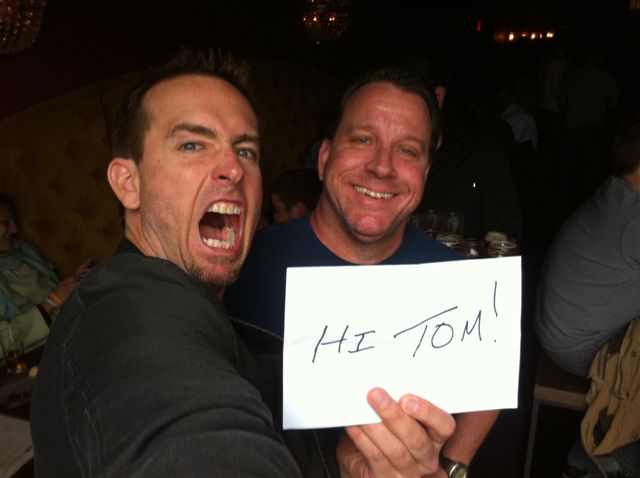 The open-mouth snarl is Koch’s attempt (I’m guessing) to replicate the gargoyle in Stone’s logo. The signage is a continuation of beer photo tag, last indulged in when I ran into Koch out at the Stone brewery in San Diego in June: 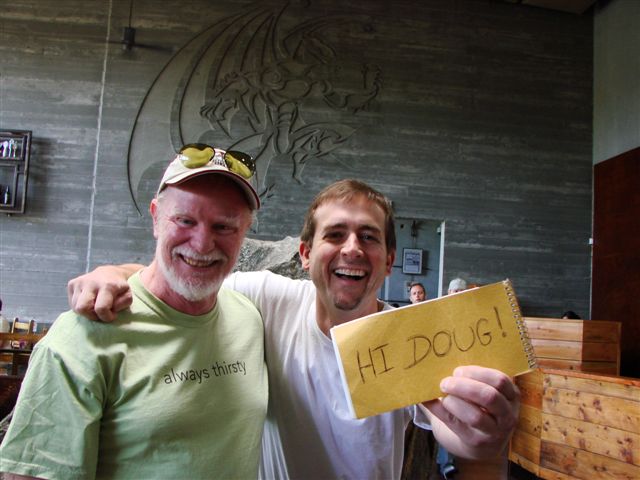 The 02.02.02 is the lightest of the VE beers in terms of ABV, at 7.5%, not light at all, but all the rest are at 8.4% or upwards. Some vintages have used only barley, water, hops and yeast, while others have used a smorgasbord of ingredients–grapes and chamomile in the 10.10.10. All are aiming at some variation of a Belgian beer, be they wits, saisons, strong pale or dark ales, or the 09.09.09, characterized as an Imperial Belgian Porter.

This one is loaded with goodies, too–roasted malts, dark candi sugar, vanilla, and tangerine peel, along with some aging on French oak chips. It pours an opaque brown with a tan head, with a predominantly chocolate nose, though my wife picked up the tangerine immediately. 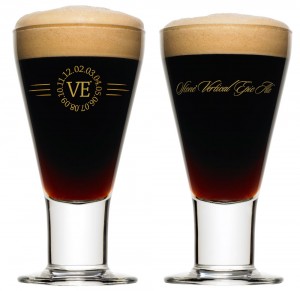 The mouthfeel is chewy and thick, like chocolate velvet, the flavor tannic like bittersweet chocolate, with faint evidence of any of the Perle or Magnum hop character (appropriate enough for a Belgian style). It’s not unlike the Bashah collaboration with BrewDog, in that I’m not sensing much of the Belgian character suggested in the label description. The chocolate malt takes over, and leaves a similarly puckering and chalky finish.

Of course, I’m drinking the beer well before its time. But I have set one bottle aside, and with any luck both it and I will still be around for the next tasting, around 12-12-12.

(Bottle and glass photos courtesy of Stone, by StudioSchulz.com)