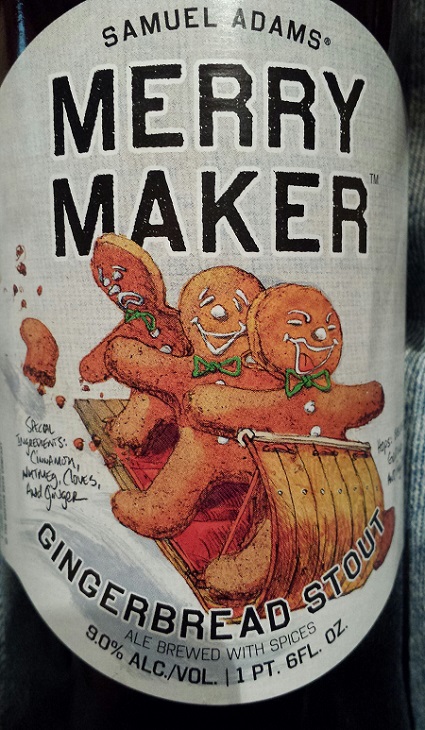 Only five beers into our 2014 journey and we’ve already had two beers with gingerbread men on the label. (Albeit this time, one of them dismembered.) And three beers that seem to feature ginger even when they don’t (like the 2014 Anchor Christmas Ale).

And I have insider knowledge that at least one more beer in the series is ginger heavy. Friends, this may be a movement. If you like ginger, no problem. Otherwise, well.

This entry is from the Boston Beer Company, otherwise known as Samuel Adams. It wouldn’t be that much of a stretch to fill an entire 12-pack with different Samuel Adams beers that could be loosely considered holiday beers or winter warmers. We might get around to them all eventually—Old Fezziwig, White Christmas, Chocolate Bock, Holiday Porter, Cold Snap….

This particular brew is one of 16 beers in the brewery’s Small Batch Series, all high ABV beers in 22-ounce bottles that might best be shared, which is exactly what happened tonight. We put the Merry Maker to the eponymous test, we being the Shakespeare group that gets together every month or so to read through the Bard’s works. This has been going on for quite awhile—coming up on twenty years—and we’ve been through every play at least twice, most three times, some four times.

We also snack, drink, gossip about town politics, solve worldly problems. In short, we have enough fun that we just keep going, reading on even through the deaths of several members, absorbing Shakespeare into our beings to whatever degree we do. We swap parts, don’t get overly histrionic, don’t delve into knotted analysis. Mostly we just read and let the words wash over us. And that’s plenty. 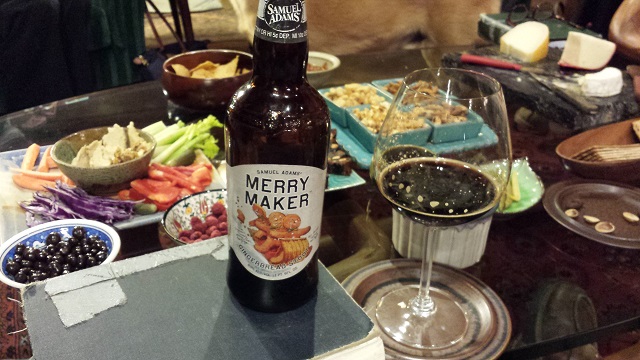 Merry Maker atop my duct-tapped edition of Shakespeare’s works.

We rarely make it through an entire play in one evening. So it was finishing up the “The Tempest” tonight, a play with its fair share of enchantment and merriment. But it also has that compelling valedictory feeling that suggests Shakespeare knew he was winding up his career, and I had the pleasure of reading Prospero tonight when he makes that marvelous speech:

Our revels now are ended. These our actors,
As I foretold you, were all spirits and
Are melted into air, into thin air:
And, like the baseless fabric of this vision,
The cloud-capp’d towers, the gorgeous palaces,
The solemn temples, the great globe itself,
Yea, all which it inherit, shall dissolve
And, like this insubstantial pageant faded,
Leave not a rack behind. We are such stuff
As dreams are made on, and our little life
Is rounded with a sleep.
–Act IV, scene 1

Our revels were just getting going when I poured out the Merry Maker. It’s a stout all right, opaque in the glass, redolent of ginger in the nose, but it gets more complicated in the palate, with cinnamon, clove and nutmeg in the spice mix, roasted barley and a bit of wheat and flaked oats, leading to a smooth, chocolately mouthfeel. East Kent Goldings and Fuggles hops are along for the ride.

The three beer drinkers among us all liked the beer, all found the ginger and sweetness components muted to an agreeable degree, and didn’t object to the strength, since we spread the beer around, thereby avoiding the antics of Trinculo, Stephano and Caliban.

Deb Luskin, who’s not a big beer drinker, but a graceful writer, gave it a sip and a one-word interjectional review: “Ew!” 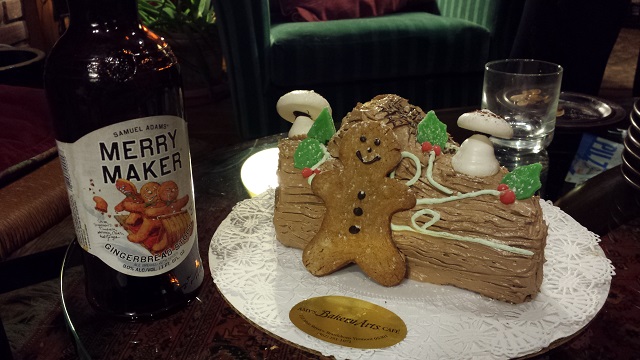 A chocolate yule log with gingerbread man. Had to be done.