[As a Library Thing Early Reviewer I’m in the running to be sent books in exchange for a review. It’s a bit of a lottery–you choose one or two books from scores offered each month, and maybe one shows up, or not. This one did.]

Novelist, essayist, artist Frederic Tuten, in a recent Zoom interview with like-minded cultural polymath Wayne Koestenbaum, said the word “beautiful” may have elusive meanings these days, “…but I really want to create something beautiful. That’s a hard thing to define, but I think we all know it when we see it, hear it, read it. We know when it’s authentic or not.” 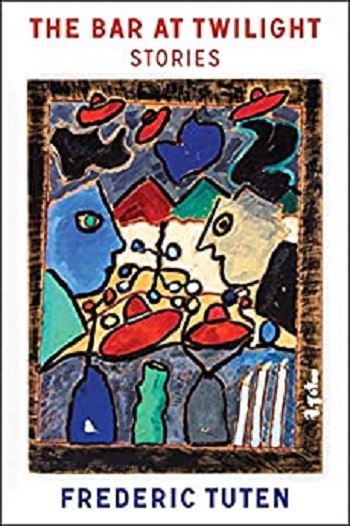 There’s no question of such authenticity in Tuten’s recent The Bar at Twilight: Stories (Bellevue Literary Press, $17.99), a collection that never flags in its allure, by turns mysterious and often surreal, many of its situations just slightly off-kilter from reality, and its characters frequently contemplating life through its commingling with art and artists. Indeed, all of the 15 stories (ranging from previously published works from 1997 to 2019) bear dedications, most of them to visual artists.

Though its protagonists are often confronting a fraying relationship, or death itself, there’s an odd comfort to be had in these pages from the octogenarian author of five novels (among them The Adventures of Mao on the Long March, Tintin in the New World, Van Gogh’s Bad Café) and the well-regarded memoir, My Young Life.

In his young life, growing up in the Bronx, Tuten had dreams of becoming a painter and living in Paris, but a devastating critique at the Arts Students League made him put down his brush and take up his pen, which he made good use of through the decades, along with his novels often writing essays on art and supplying short fictions for artists’ catalogues.

He became good friends with artist Roy Lichtenstein, who looked at some of Tuten’s colored pencil drawings and urged his friend, then 60, to continue with his art. So he did, with numerous successful shows since.

So it’s no surprise to find a story like “Lives of the Artists” in the collection, in which the narrator works on a book about the lives of Rousseau, Monet, Gauguin, Cezanné while remembering his own relationship with the more contemporary Eva Hesse. All the while he is idly, but jealously, watching over his companion while she shows her work to a gallery owner. 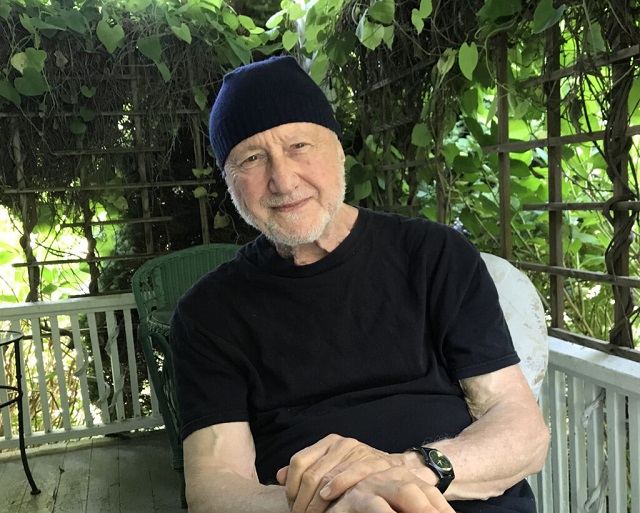 Here, as in many of the stories, there’s a missing dog or cat to contend with, snow is falling, and the relationships seems freighted, as if moving one more block would send the structure tumbling. There’s a blend of realism and the fabulous, sometimes tinged with the whimsical, as “L’Odyssée” when Tuten retells the story of Odysseus returning to Penelope to rid his home of her many suitors. Except here Odysseus has become Popeye and Penelope Olive Oyl.

In “The Snow on Tompkins Square Park” a man wanders into a bar that serves only horses or people who look like horses. In the title story a man walks into the same bar but years later, the horses gone. A centaur soon arrives trying to find traces of his mother, a horse who used to frequent the bar. Soon the small band in the confines seemed further hemmed in by snow as they discuss life and death, and then decide to labor toward the harbor, boarding a boat that suddenly seems like the ferry to the afterlife.

Cultural touchstones abound—Montaigne (“The Tower”), Nathaniel Hawthorne (“In the Borghese Gardens”), Delacroix (“Delacroix in Love”). And in a nonfiction epilogue Tuten tips his hand to some of his influences in “Coda: Some Episodes in the History of My Reading.” The gamut is broad, from Verne to Twain to Hemingway to Barnes to Gide to, somewhat surprisingly, Simenon.

His love for books is such that Tuten cannot imagine an afterlife without them. For him, “No simple coffin will do. I need a mausoleum… [with] floor-to-ceiling bookcases, carpeted floors, three or four comfortable leather club chairs, and reading lamps with rose silk shades beside them, and a skylight high above my marble sarcophagus. This is a library that I do not and never shall have in life but that I enjoy imaging will be built after my death. Open to the public—for free, of course—twenty-four hours a day, until the end of eternity.”