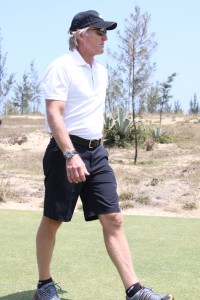 A couple of years ago, I walked the about-to-open Danang Golf Club, near the eponymous city on Vietnam’s Central Coast, with Greg Norman, its designer. (Full disclosure: I was “covering” the visit for Mandarin Media, the media relations firm representing the club.)

Having just flown up from a project site in Indonesia, Norman was on his way to yet another prospect on Hainan Island, in China. He was stopping by Danang for a few hours of ceremonial document-signing, exchanging pleasantries with local officials, and one last tune-up spin around the new layout. Not surprisingly, then, he expressed bullishness about the part Asia will play in the future of golf.

“The game of golf has changed direction. The West has been taken over by the East,” he stated. “And that really started with the injection of golf into the Olympics. Asia and especially China are really going to lead the expansion of the game of golf at the grassroots level.”

Norman reprised this endorsement of Asian growth at a subsequent PGA Merchandise Show, which also announced plans for an installment of the show in Asia.

Not to be a wet blanket – and juxtaposed with the domestic market for new courses, just about anywhere looks and is fecund – but Asia will not be the solution to all the game’s woes. Here’s hoping I’m wrong, but a year based in Saigon persuades me otherwise, because:

• About the “grassroots” part. Wherever you place golf on the elitist-versus-egalitarian continuum now, there’s no denying that the game’s origins in Scotland included a solid Everyman tradition. No such tradition exists in Asia; it’s a maturation phase they just skipped. China’s 1.3 billion population isn’t a very reliable predictor of participation; and the talk about a burgeoning middle class – as opposed to a class with suddenly substantially more money – is similarly misleading. Golf is still a way to announce that you’ve arrived.

• Back to the future. A related point is that Asian tastes in golf-course architecture flout progressive thinking out West when it comes to design. Here, we’re talking about the brown look, reduced maintenance requirements, traditionalism, minimalism. In Asia, quality is defined by a manicured look, a garden concept.

• A different environment. Course development in the West has its own environmental hurdles to clear, but at least a history of agrarian land-use and, often, communist influence are not among them. Governments seem to vacillate in their acceptance of the sport; and while construction of new courses in Asia is unlikely to come to a halt, this ambivalence continues to function as a braking mechanism.

• It’s always something. Even for us non-geopoliticians, there’s the strong sense that a by-product of the region’s phenomenal growth will inevitably be some sort of social upheaval. While we hope for a mild version of the phenomenon, it’s difficult to envision one that would promote the growth of golf.

• An Olympian undertaking. Speaking of which, the Brazil Olympics do represent a singular opportunity for exposing people to golf, but there’s no guarantee the portrayal won’t confirm rather than refute its image as a game of privilege. After all, televising the dressage hasn’t resulted in an explosion of equestrianism.

Asia will continue to infuse pro tours and other rarefied competitive golf strata with increasing numbers of top-rate players. The region will also see more high-quality, upscale development. All to the good. Whether this will produce a vastly different “golf scene” is another matter. Unfortunately, nobody’s immune to the vicissitudes of modern development, wherever it happens to be.