Below are some of the things that struck me as noteworthy at last week’s PGA Merchandise Show. The one thing they have in common, as the Alan Arkin character says in Little Murders, is that they have nothing in common.

Actually, not quite true. The captious will notice that the emphasis here is on comfort rather than, say, explosive power, perhaps indicative of its author being “in transition,” as a psychotherapist might describe it.

TRUE linkswear. Having once seemed to be the only guy in town ever to wear golf-and-travel shoes – a pair of Rockports and a pair of Bites – I’ve wondered why the concept hasn’t caught on. It probably took the airlines and their baggage regulations to provide the necessary inertia, and now the show is lousy with course-to-street shoes. My favorites were the discretely logoed TRUE linkswear models. Although I can’t vouch for their “feel the course,” improve your game claim, they are as comfortable, if pricey, as advertised.

CROSS Golf. A golf trip to Sweden several years ago confirmed it an underrated destination, including an enthusiastic golfing population that also seemed generally more fashionably turned out than we are. Founded in Sweden in 1986, the CROSS line, just introduced here, seems of a piece with the national sensibilities and, according to the promos, inspired by Swedish pop icons: It’s colorful, with plenty of solids and plain geometric patterns. The fabric has an agreeably loose elasticity devoid of that spandex feel, especially in the outerwear, and the line includes a pair of slacks that would appear to be most comfortable in warm, muggy weather – a rarity.

INNOVEX Golf. Comparatively affordable golf balls have been available since the advent of mass production processes, but Innovex is unusual in its attempt to join the ball elite – at a substantially reduced MSRP. Is it a “tour level” ball, as claimed? We’ll see, but initial reviews have been favorable. And any embrace of affordability – the biggest culprit in declining rates of participation – is welcome. Comes in cast urethane and three-piece models.

BAG BOY. An old-line company that’s always generated its share of common-sense innovation. This year’s contributions from Bag Boy include a travel cover, the T2000, with a swivel handle that rotates to prevent arm-and-wrist torque and keep the wheels on the tracks. There’s also the TriSwivel push cart, a three-wheel model featuring a front wheel designed to rotate 360º, though it can also be locked in a fixed, straight-ahead position.

aboutGOLF. Is it symptomatic of schizophrenia to be an avowed traditionalist and simultaneously dazzled by 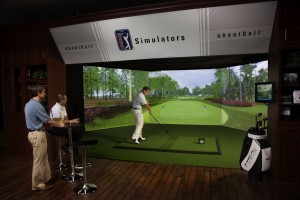 some of the new technology? I sure hope not. Because aboutGOLF’s golf simulators have always seemed really cool and the company seems committed to making them cooler. This year’s enhancements include a three-screen, 150º hitting bay where the course before you can be made to “rotate” to match your lines of vision; a portable, wireless launch monitor for indoor and outdoor use; and in conjunction with sister company Henry-Griffitts, a hitting mat with an intricate network of sensors to precisely measure weight transfer during the swing.