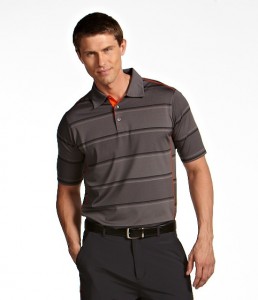 Until several years ago, I was something of natural-fiber snob. All that was required to change my thinking was a year in the sweltering, fetid jungles of Southeast Asia. OK, it was actually Saigon; but it was hot and humid. Profuse sweating on the golf course was a fact of life, and cotton got soaked and stayed that way all day, until you took it off to shower. Microfibers (as I believe they were called) afforded at least some relief.

And like golf clubs, the technology’s improved. It would be absurd to compare conditions in Vietnam with the ones we’re experiencing in Scottsdale, where the 75º F-and-sunny routine has become a running gag. Neither our Antigua Performance Apparel nor we have broken a sweat.

Of course, golf writers have proven repeatedly that we’ll wear what we’re told, but apart from its moisture-wicking potential, the new Antigua Desert Dry line happens to overlap this writer’s tastes in general specifications. The sleeves on the polo shirts are hemmed, not banded; collars are without animal parts, stripes, or other decoration; the logo is discrete.

(In a coincidence without any apparent significance whatsoever, Antigua’s polo shirts are manufactured in Vietnam.)

The eight percent dose of elastic in the fabric makes it comfortably clingy without being restrictive, even after, say, binging on bratwurst and a representative sampling of craftbrews from west of the Mississippi. The same is true for the windshirt (except the Vietnam part; it’s made in Thailand).