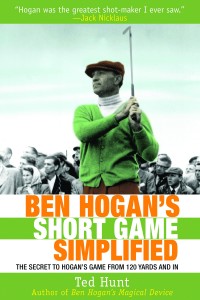 By coincidence, two short-game instruction books crossed my desk this week. Both involve golf icons — Ben Hogan and Dave Pelz — and as such make for interesting comparisons and contrasts.

Hogan, of course, is the subject, not the author, of Ted Hunt’s Ben Hogan’s Short Game Simplified, subtitled The Secret to Hogan’s Game From 120 Yards And In. Pelz is the progenitor of modern short-game improvement, as well as its best-known and most prolific practitioner. This time he takes on Golf Without Fear (How to play the 10 most feared shots in golf with confidence), written with Eddie Pelz and Dave Allen.

In that sense, the dichotomy the books form pits the cultish intensity of Hogan and his regimen against Pelz’s anyone-can-do-it populism.

That said, they books have plenty in common. In an age increasingly given to computer-generated swing feedback, both books use comparatively straightforward graphic techniques to illustrate their points. Both are, in their ways, rigorous.

Ben Hogan’s Short Game Simplified is the sequel to Hunt’s Ben Hogan’s Magical Device, which constitutes the full-swing iteration of said magical device. The new book combines a description of how the Magical Device – it’s not giving away too much to reveal that it’s the connectedness of the torso, arms, and shoulders – became the linchpin for Hogan’s “system” for producing superhumanly consistent ball-striking.

In explaining the evolution of Hogan’s short game method, Hunt’s treatment is as much history as instruction, which is what I liked about the book. The author is able to interweave the two with just about the right amount of Hogan’s story to suit someone who understands Hogan’s stature without knowing a lot about the guy. Long-time Hogan devotees will likely already know most or all of the biographical stuff, but even then the evocation of Hogan’s era is good.

physiology and human kinetics, as well as a doctorate in history. So there’s a glossary of terms and some lucid commentary to explain the photos, some “homework” and a chapter called “Ten Stages of Hogan’s Swing in Seratim.”

Still, the author concedes the approach might not be for everyone, even as he assures us that a seven-day program, described herein, will definitely shave strokes. And of course it’s also possible to pick up little pointers – like the “long left thumb,” a weakened left-hand grip that helps prevent rolling the clubface over when chipping – without buying into the whole system concept.

For the most part, the memoir-cum-instructional approach works, although there are redundancies. While Hunt doesn’t completely gloss over Hogan’s less likable traits, the praise for his golf acumen and determination can seem hagiographic.

Hunt’s citation of sources can also sound like name-dropping – “On the Pebble Beach putting green, I remember Jack Nicklaus practicing after dinner the evening before the final of the 1982 U.S. Open,…..” – but at some point it became more like a running golf writer gag and I started to like it.

Who knows? I wouldn’t rule out the magical device thing if I could find the right seven-day interval. (Skyhorse Publishing Inc., www.skyhorsepublishing.com, 168 pages, $16.95.)

Next: Dave Pelz’s Golf Without Fear (How to play the 10 most feared shots in golf with confidence)