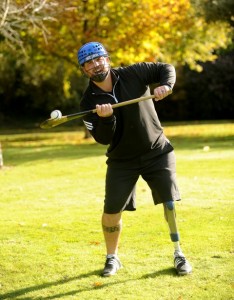 He's got game: Watching Chad Pfeifer play golf makes it easy to believe he'd excel at any number of sports.

No words escape my lips, but the grin says: You’re away, Chad. The most captious of detractors will point out that this is unprecedented during the previous 12 holes we’ve played together at Royal County Down Golf Club, in Newcastle, Northern Ireland. It’s also true that a substantial portion of my drive’s distance came on the slick fairway, whereas Chad uncharacteristically found the ball-swallowing rough. And OK, Chad does play on one leg.

More precisely, Chad Pfeifer plays on a prosthetic left leg, having lost the limb from the knee down to an improvised explosive device in Iraq. His rehabilitation included a 14-month hospitalization.

Chad’s story is part of the reason I’ve already been grinning all day, even as he leaves me in the dust, outdriving me by roughly 50 yards a pop. A 31-year-old scratch golfer from Idaho, he’s the defending Armed Forces champion, having won the first two installments of the wounded warrior tournament.

Watching Chad’s towering ball flight and effortless power produces the same sensation as, say, watching a world-class musician: He’s so good it’s funny. The giddy feeling is compounded by the perfect playing conditions – sun-and-cloud collages that look different on the Emerald Isle than anywhere else – despite the dire forecast we’d received earlier.

(Our trip is magnamiously sponsored by newly launched Golf Digest Irish Tours and also includes stops at several iconic Emerald Isle venues: Ballybunion, Tralee, Waterville, Ardglass, Royal County Down, The European Club, all of whom contributed rounds gratis, as did the first-rate hoteliers accommodating the group. Assisting in the logistics is the Folds of Honor Foundation, which provides scholarships and other assistance to severely injured service members and their families while they transition to civilian life; and the Salute Military Golf Association, which champions golf’s rehabilitative benefits for wounded war veterans in a family inclusive environment.)

As unassuming as he is athletic, Chad’s straight-legged gait over the fairways of Old Tom Morris’s layout, where carts (“buggies” in the local terminology) are prohibited provides the only clue to his injury. Playing Royal County Down – a perennial “best-of” course to which I have a decades-old sentimental attachment – with him is one of those delightful days known only to golfers.