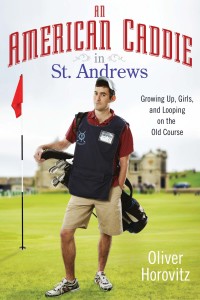 Oliver Horovitz sounds like – and from the book jacket for An American Caddie in St. Andrews, even looks like – a nice kid. So it seems a bit churlish to knock his writing for not breaking new ground. The problem is not that it’s badly written; just not good enough to escape the clutches of its oft-explored themes. (The subtitle is “Growing Up, Girls, and Looping on the Old Course.”)

Thus, there are bonnie Scots lasses, an elder – Uncle Ken – to respect and from whom to absorb wisdom, and an assortment of young friends from a Benetton catalog. Then there are the crusty caddies.

At first, Ollie doesn’t understand their standoffishness, figuring, apparently, that being an American from a comfortable Jewish family, taking a year off before matriculating at Harvard, ought to be conversation-starters.

The trouble is that even when he’s achieved acceptance through diligence in his craft, the veteran caddies still come across mostly as hard-bitten and loutish, just somewhat less so.

Maybe this is partly a function of having played with a representative sample of caddies, as well as having plied the trade myself. Yes, you’re more likely to get a great caddie in Scotland than in, say, Jamaica. Most of the time, though, any reasonably companionable caddie will do.

In a similar vein, An American Caddie is likeable mostly for not being unlikable. Is the St. Andrews caddie crew’s devotion to golf adherence to some higher standard or more like an OCD refusal to embrace other aspects of existence? Horovitz is able to convey his enthusiasm for the game in a salutary way, with virtually no deconstruction of individual rounds, shots, etc., that typically mar accounts of “spiritual trips” to St. Andrews.

He has a similarly light touch in describing caddying encounters with various celebrities and does a decent job of capturing the golf-as-religion atmosphere of the place.

Not for nothing is it called the auld grey toon, of course. But if, like me, you try to read a non-guide book set in an upcoming destination, you could do worse than An American Caddie prior to a trip to St. Andrews. Horovitz even provides some tips for getting around the Old Course, including “don’t bring a 65-lb. cart-bag.”

If you’re a virgin, so much the better.