Iconic Atlantic City, New Jersey has taken its’ lumps in the media with the arrival two years ago of Hurricane Sandy and the departure, two months ago, of four flagship casinos. But the popularity of the hit television show “Boardwalk Empire,” and the return of the glamorous “Miss America Pageant” to its’ historic, beachside venue, has new mayor Don Guardian standing proud.

“The monopoly we had on gaming is closing as casinos open elsewhere so it’s time to move on. We have to focus on everything else we used to do before we got gaming and got a little lazy,” said Guardian. The phase is not unprecedented. As the show “Boardwalk Empire” depicts, Atlantic City defied Prohibition laws and had a monopoly on booze at one time, too. “We have a storied past, and it seems like every 25 years or so we close a chapter. Now is one of those times.” 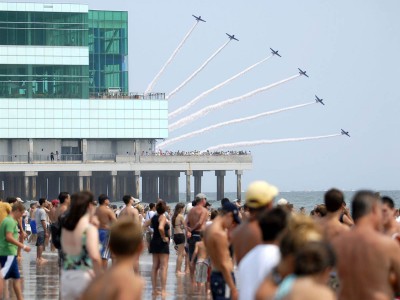 Beach, sea and sky at the Boardwalk – an air show draws attention to Atlantic City.

Casino hotels, including the towering Tropicana – which is full of shops and restaurants lining “The Quarter,” an indoor cobblestone street under a faux sky to designed to evoke the sensation of being in Havana, Cuba – still line the Boardwalk and draw nearby New Yorkers and Philadelphians. Mayor Guardian, though, says while gaming revenue has dipped by 50-percent in the last six years, non-gaming revenue has risen from 100-million to a billion in the last decade. “Entrepreneurs are creating cool places to eat and drink. Boardwalk Hall has an incredible light show every 30 minutes; 100,000 people came for a free Blake Shelton concert on the beach; and a half-million came for an air show. We have wine-tasting weekends and in-water boat shows. Those are the kinds of things we’re doing to diversify our economy.”

The Boardwalk still thrives with Americana: cotton candy and corndogs, souvenir stands and seagulls, fortune tellers and funnel cakes. Golf is also a very good vacation draw with enough diverse, quality courses to last all week. The term “birdie” was invented in 1903 at Atlantic City Country Club, where its’ famed, period piece locker room, is like going back to the golden age of American golf. Harbor Pines Golf Club has a completely different feel. “We have people compare us to the tree-lined, peaceful courses in the Carolinas,” said general manager Bob Ewing. Two miles away, Twisted Dune Golf Club is like an open, Scottish links course – fast and fun with sharp plateaus and biscuit brown contrast. The proximity of this many courses in totality is like Melbourne, Australia’s famed “sand belt.” Seaview (host to an LPGA event), Shore Gate, Greate Bay, and Renault Winery Resort and Golf should make every golf itinerary, too.

Michigan-based travel writer Michael Patrick Shiels may be contacted at InviteYourself@aol.com or via www.TravelTattler.com   He may be heard and seen weekday mornings in Lansing on 92.1 FM and Fox 47 TV.