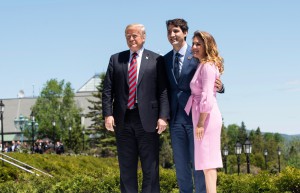 If Fairmont’s Le Manoir Richelieu was good enough for seven world leaders to visit at one time, the resort must be something special. Canadian Prime Minister Justin Trudeau welcomed six other world leaders, including President Donald Trump, to the historic, cliff top, chateau hotel overlooking the St. Lawrence River in the countryside 90 miles north of Quebec City in early June for the 2018 G7 Summit. The stately luxury hotel, with 405 guest rooms and four restaurants perched in La Malbaie (population 8,000), was built in the 1920’s. President William Taft also opened its golf course and now, with Casino de Charlevoix also on property, it was ironic that Trump, who used to be in the golf and casino business in Florida, New Jersey, California, Virginia, Scotland and Ireland prior to his election, checked in.

“President Trump could have played golf but I think the schedule didn’t allow it. He seemed to have been surprised at the view, anyway, when he looked out and saw the first hole and how beautiful the landscape is,” said Caroline Oullette, Fairmont le Manoir Richelou’s director of sales and marketing. “The ‘family picture,’ as it is called, where all the attending world leaders are lined up, was taken from our golf course, which is a seven-minute electric cart-ride from the hotel up to the golf course. The first tee, on which they were photographed, has a drop-down view of the St Lawrence River which, at that point, is 30 kilometers wide. It seems as though the resort is at sea.”

Welcoming, housing, feeding and facilitating meetings for the leaders of the USA, Canada, France, United Kingdom, Italy, Germany and Japan – plus providing access to the necessary media and security personnel, was an exciting challenge, but the hosting the event in a tiny, pastoral town helped facilitate the necessary security and safety of the leaders.

“The resort’s remote location is also what makes it so spectacular. It’s been a year of hard work and preparations filled with emotions leading up to the last moments. Over the weekend they were here, it was a wonderful experience for all of our staff to be part of and to witness,” said Oullette.

Witness and taste, since the world leaders were treated to Canadian cuisine.

“The ‘Flavor Trail’ (La Route Des Saveurs) begins as soon as you leave Quebec City and travel between the sea and the mountains. Tourists can visit organic goat cheese makers, craft brewers, emu farmers, chocolateiers, charcuterie plants, cider mills, sweetbread bakers, free-range duck farmers for foie gras, and wineries – and some of them offer restaurants on site,” said Oullette. “The world leaders got a taste of this through the meals we served them. This is what we do best.”

“I wanted the leaders and their teams to experience the legendary hospitality of the people of this region and that is exactly what I have seen in the last few days. Thank you to all the members of the community and the team at the Manoir Richelieu whom played a role in the Summit running well,” said Trudeau before turning the Fairmont Le Manoir Richelieu back over to the tourists and guests who have resumed visiting for golf, kayaking, hiking and, in the winter, riding snowmobiles, cross-country skiing, and more. It’s presumed that corporate entities would like to stage their business meeting at a prestigious G7 site, as well.

For more information visit about how to experience world leader-style pampering visit www.Fairmont.com/richelieu-charlevoix