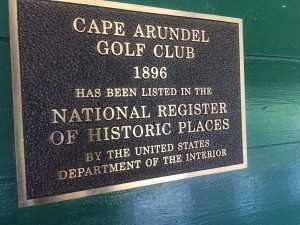 Pulitzer Prize-winning, bestselling author and political journalist Jon Meacham has visited Grand Rapids in the past to speak at the Gerald Ford Presidential Museum; but I caught up with him in Kennebunkport, Maine in mid-June, where he participated in the George H.W. Bush Celebrity Golf Tournament. The affable Meacham and I spoke on the porch of Cape Arundel Golf Club – itself on the registered list of historic places – but famous, too, for being the unassuming, public golf course of generations of the Walker and Bush families, including the two “Presidents Bush,” who summer at their nearby, oceanfront family compound. Meacham recently authored his latest revealing bestseller, “Destiny and Power: The American Odyssey of George Herbert Walker Bush.”

I fear my contribution to literature is introducing the world to the phrase ‘iron ass,’ he joked, in reference to a controversial passage in the book quoting Bush. The 41st President told Meacham that Donald Rumsfeld, who served as Secretary of Defense to the 43rd President George W. Bush, was arrogant and hurt his son’s presidency due to Rumsfeld’s “iron ass” view of everything.

I told Meacham – as I’d told the elder President Bush a day earlier – that just a week before I arrived in Kennebunkport I’d bumped into the retired Rumsfeld at a gala re-dedicating the renovated Ford Presidential Museum in Grand Rapids. Knowing I’d be seeing both President Bush and Meacham in Kennebunkport, I couldn’t help myself so I asked Rumsfeld, “Mr. Secretary, does anyone call you ‘Iron Ass’ anymore?”

Rumsfeld didn’t miss a beat and answered, “Well…I sure hope so!” and walked away. 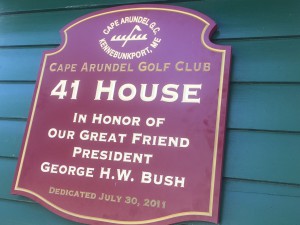 The Bushes, who have been married over 70 years, once lived in Trenton, Michigan while George, at Grosse Ile Air Station, learned to fly and become the U.S. Navy’s youngest aviator. “That was a long time ago,” said former First Lady Barbara Bush, sitting on a golf cart nearby. “We’ve been married so long because I just adored George from the moment I saw him. So he didn’t have a choice.” Mrs. Bush, who remarked to Meacham after reviewing her diary entries for his book, “Gosh I was an opinionated woman back then,” was shaded by a light blue hat and wearing her signature mismatched Ked sneakers and big pearls around her neck. “Oh these are fakes. I could never have real pearls like this,” she demurred when complimented and then joked, “A lot of things on me are fake by now. God won’t even recognize me when he sees me!”

Members of the Bush family are seen frequently in the summer around seaside Kennebunkport, which is less than an hour south of Portland airport and 80 miles north of Boston. George W., the 43rd President, in early June, played golf at Cape Arundel almost daily and frequently posed for photos. The historic Colony Hotel, near the Bush family’s very visible Walkers Point home, is a similar experience to Mackinac Island’s Grand Hotel. For information visit CapeArundelGolfClub.com or GeorgeBushCelebrityGolf.com