The origin of Halloween is found in Celtic Ireland…and the Irish take the concept of spirits and the afterlife very seriously. For instance, by tradition, when a person dies, there is to be no mourning in the house until the body is properly prepared in order to prevent the fairies or the devil to catch the soul before the angels do. This is according to Cathy Jo and Steve Smith, from Dublin, Ohio, who presented a typical “Irish Wake” (body and all) through a somewhat maudlin tent display in Muskegon at the annual Michigan Irish Music Festival. Clocks should be stopped at the time of death as a sign of respect, and mirrors should be covered since the three-day funeral was a time for more important reflections. While the three days was meant to allow friends to gather, it was also to make certain the deceased was actually dead. 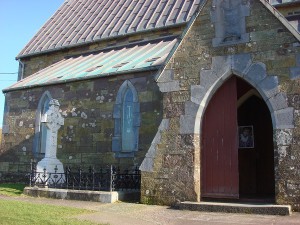 Someone had to tell the cows in the field, too, so they would not become upset and leave the farm. (No joke.)

A proper three day send-off, held in the home with the body available for dancing, etc, included food, tobacco, drink, feats of strength, wrestling, singing and practical jokes. Smoke from pipes was thought to purify the air and salt was a charm against evil.

Leaving the corpse unattended or in the dark was the worst sort of disrespect.

“Keening” was the Irish word for mourning, but it meant more than crying. It is, rather, praise and lament for the deceased. Sometimes a professional keener or bard was hired to tell the genealogy and virtues of the dead.

Cathy Jo’s booklet, “Wake Me When It’s Over,” is available at IrishTeller.com.

If you want to get into the spirit, pardon the pun, without being invited to an Irish funeral, try listening to the song “Finnegan’s Wake” (not to be confused with the vexing James Joyce novel), an 1850’s-era ballad recorded by the Dubliners or the Tommy Makem and the Clancy Brothers. The song tells the story, as many Irish songs do, of the wake of a drunken Tim Finnegan who fell from a ladder and broke his skull. But when revelers accidentally spill whiskey on his corpse, it revives Finnegan, who’d apparently been only in a coma! The moral of the song? Whiskey caused both his fall and his surprise resurrection!