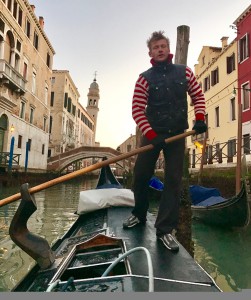 Gondoliere serenade passengers through the canals of Venice and under the Bridge of Sighs. (Photo by Michael Patrick Shiels)

The precise line in Samuel Taylor Coleridge’s poem “The Rime of the Ancient Mariner” is: “Water, water everywhere nor any drop to drink.” The line mystifies people in the “Water Wonderland” of the Great Lakes area, excluding, I suppose, some Flint residents, but in ancient Venice, Italy, which is actually a collection of islands on the Adriatic, it’s easier to understand.

Venetians, with a touch of wry humor, advise tourists, “If you should fall into one of the canals don’t worry about drowning…but be certain to keep your mouth closed.” (The inference is the water is not dangerously deep but, rather, desperately dirty.)

On an evening in Venice, after a very short stroll from Hotel Londra Palace – a five-star favorite on San Marco’s Basin – I reached Danieli Gondola Station, where Cooperative Daniele Manin, a service recommended by the Italian tour company ICBellagio.com, put me into – or rather onto – one of their authentic, handcrafted Venetian gondolas.

I was self-conscious for two reasons: the first is the clumsy climb-down from the dock to board a gondola is a wobbly affair; and secondly, circumstances dictated that I had to experience the iconic, romantic cruise through an intimate maze of narrow waterways…alone. This fact did not stop the “gondoliere,” standing up on the back of the boat in his traditional black and white striped shirt, from serenading me with “Oh Solo Mio…” while using a long pole to push the boat through the minor canals, stylish Renaissance architecture and twinkling lights of the St. Mark’s district. I swear I saw snickering from the people looking down at “solo me” – from the many ornate bridges I floated under as the gondoliere sang another amorous standard “…venite all’agile barchetta mia! Santa Lucia! Santa Lucia!”

In order to reduce my red face I struck up some conversation with the gondoliere, who told me the rate of approximately 80 Euro for a 40-minute loop was standard and set by the city; and that it took him two years of training to gain certification on the elaborately decorated gondola, which, even without a motor, was worth about 80,000 Euro. If everyone sits still, the gondola can hold up to six guests – and yes people occasionally fall overboard into the canal. My gondoliere once successfully, but not easily, guided the giant basketball player Shaquille O’Neal on board and off.

Though it was unconventional if not melancholy, I was grateful for the old world experience. My solo ride, like all, concluded with a pass on the Rio di Palazzo under the famed, circa 1600 “Bridge of Sighs,” the likeliest spot for thousands of engagements.

“Since it’s normally such a romantic experience and couples on board are likely in love, have any ever tried to make love during a gondola ride?” I inquired.

“What did you do when that happened?”

“Look straight ahead and keep singing,” he answered with a smile and a shrug.