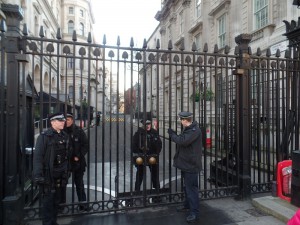 Pussycat, pussycat where has Dave Lorenz been? He’s been to London to entice vacationers to “go on holiday” to Michigan. Just before the U.S. State Department issued travel warnings advising American tourists to be cautious in Europe this summer, Lorenz, VP of Travel Michigan, has made multiple media appearances in “Jolly Old” touting the “Great Lakes State” as a travel option for the British.

London, with shopping at Harrod’s, iconic tourist sites Westminster Abbey, Buckingham Palace, and the London Eye, plus luxury hotels, fine dining and museums, according to Lorenz, is the most expensive city in Europe. But there are plenty of non-stop Delta flights from London’s Heathrow andGatwick Airports to Michigan. “With the strength of the dollar vs. the pound we’re concerned the English may be reticent to visit the United States,” admits Lorenz, “which is why we’re working hard to show them the great value Michigan is.”

Lorenz and his team have been very successful so far: Michigan is the U.S. state showing the greatest growth for international arrivals. “International travelers typically stay longer and spend more money than our treasured domestic visitors, plus they go home telling stories of their visits and encouraging friends to come.”

“People in the United Kingdom often wonder if anything happens in Michigan other than automobile manufacturing,” Lorenz revealed. “Once we show them photos and videos of the natural beauty of our state they are intrigued and can’t wait to visit.”

Travel Michigan had focused their efforts on German tourists, with whom Michigan has been very popular, and have now expanded their efforts. Paris, of course, is just a high-speed train ride through the “Chunnel” from London. Thomas Bourdeau, a French journalist hosted by Travel Michigan a few years ago, remembers his Michigan visit fondly and also encourages travel to France despite the recent terror attacks.

“It was unexpected and we are still under threat, but France and Paris stay strong. We are careful but living in Paris is okay. There’s no problem. Spring is here and people are on the street without fear,” he insists.

Recent incidents at the famed Louvre Museum and on the Champs Elysees have caused officials in Paris to provide increased security at locations popular with tourists, and a safety barrier is being erected under the base of the Eiffel Tour.

French Presidential finalist Marine La Pen benefited from some of the nervousness in France. “She is popular because of the unemployment and terrorism,” says Bourdeau. “People who vote for her are angry, and there is plenty of anger here in France, but I do not think ultimately she will be elected.”