Evan Neas, a Pinehurst professional caddie, stood in the setting sunshine after a day toting golf bags under Carolina blue skies in temperatures topping 90-degrees and an even higher heat index. The veranda of “The Deuce,” the gastropub behind the 18th green of Pinehurst’s Resort’s famed #2 course offered some shade, but Neas was looking forward to an upcoming trip to “Pure Michigan.” 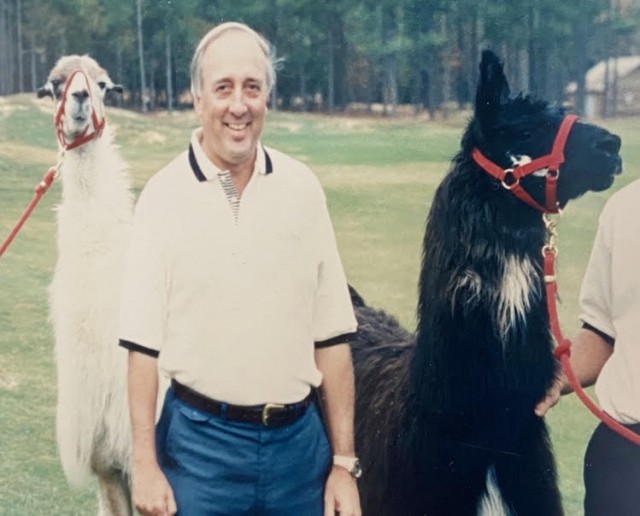 “I’m ready for fall. It will be nice to get into some cooler weather,” said Neas, who said he was headed to Boyne Resort’s on a golf trip. “There will be a little drinking and some money changing hands.”

It’s not first visit Neas has made to Michigan.

“I helped start the caddie program at Forest Dunes Resort in Roscommon and I have to tell you I fell in love with Michigan,” he said, in his southern drawl, the same drawl that charmed the young ladies he met while living in near Roscommon in Houghton Lake.

“I had a good time. Everyone in the Midwest is very welcoming. I have too many stories from frequenting the Limberlost Bar. I recommend it to anyone that’s up there.”

The wildlife at Houghton Lake’s most infamous bar wasn’t all Neas encountered making the daily 30-minute drive to Forest Dunes. “I saw tons of deer and lots of wild turkeys. Forest Dunes is in the middle of nowhere. If you didn’t know where it was you would never find it.”

“The word was when Doak was around he walked his course, The Loop, with only seven clubs,” said Neas. In homage to Pinehurst Resort’s wildly popular new “Cradle” course, Forest opened their own short walking course upon which players can grab two clubs and even eschew their shoes – no caddies needed for holes around 100 yards long.

The most curious caddie program of all was founded in 1991 at Pinehurst’s Talamore Golf Resort, according to general manager Matt Hausser. “We were looking for something different and bouncing around ideas so we settled on llamas as caddies. A special harness carried two golf bags and since llamas like people and are pack animals by nature they were always ready to carry something and go.”

Hausser said the llamas were trained and so when “nature called” they did that only in their pens and not on the pristine fairways lined by majestic of the Rees Jones-designed golf course. “People think llamas are nasty and spit at you, but they actually are very nice.”

Whimsical llama artwork, photos (“Dollie Llama”) and memorabilia is displayed in the clubhouse, on the resort’s logo, and on apparel and merchandise. Live llamas are still showcased on the 14th hole in their comfortable pen. Lodging for Talamore Golf Resort’s guests is even nicer: two and three-bedroom, private-entry villas with balconies allowing the for the aroma of the pines…and the twice weekly complimentary classic Carolina Pig Pickin’ barbeque dinner. “We cook an entire pig in our slow cooker all day in the golf course parking lot so everyone that comes through can smell it,” said Hausser, who said the pork, potato salad, coleslaw, biscuit and banana pudding dinner is just one example of Talamore’s commitment to southern hospitality.

Talamore also operates the Arnold Palmer King’s course at Mid-South, neighbors Pinehurst Resort and Pine Needles Lodge and Golf Club, both of which have hosted men’s and women’s major championships. “We’re happy to be right between them,” Hausser said.

Contact Michael Patrick Shiels at MShiels@aol.com Hear his radio program weekday mornings from 9-noon on WJIM AM 1240 in Lansing or at MiBigShow.com