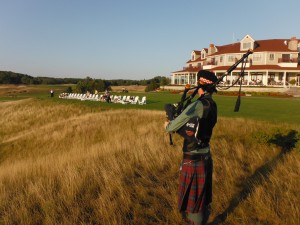 Piper Roddy MacNeil is among the touches that give Arcadia Bluffs, above Lake Michigan near Manistee, a British Isles flavor. (Photo by Harrison Shiels)

The word haggis strikes fear in the hearts of milquetoast eaters not familiar with the traditional Scottish dish. But when Emmy Award-winning English sportscaster Ben Wright came to Michigan to celebrate his 80th birthday, the culinary team at Arcadia Bluffs Golf Club, north of Manistee, showed the courage of a rampant lion. Arcadia Bluffs, open to the public for lunch, dinner, golf, or overnight stays, is designed to with a British Isles-style look. Since Wright has Scottish heritage, general manager Bill Shriver asked Arcadia’s head chef Brett Phillips if he’d attempt to prepare the haggis as a surprise for Wright’s birthday party scheduled in Arcadia’s private dining room by locals Chuck and Georgia Bavol.

“Chef Phillips loved the idea of a challenge and everyone in the kitchen got involved,” said Shriver.

Getting a recipe and gathering the proper ingredients in Northern Michigan, not the Mull of Kintyre, Glasgow, Edinburgh, or Aberdeen, wasn’t easy.

“It took a little research,” said Phillips. “And since you can’t get sheep’s stomach in the United States I had to use a pig’s stomach.”

“Haggis is kidneys, liver and lungs grinded up, mixed with spices and oatmeal, stuffed inside a stomach and boiled for six hours,” Phillips explained. “I made several. The first couple was a complete disaster. One of them even exploded.”

Even Wright admitted that if you’re eating haggis for the first time, “it is best not to know what’s in it.”

When hunting meant survival in old Scotland, all parts of the dead animal had to be used. Since the innards and organs were the most perishable, they had to be consumed first.

“I was ultimately amazed at how delicious it was,” said Phillips.

“Best I’ve ever tasted,” agreed Wright, who was, along with his guests, presented with the steaming stomach during a traditional “Haggis Ceremony,”  which took place in the gloaming (twilight) with a sunset view from Arcadia’s glass dining room over the golden dunes into Lake Michigan. World champion bagpiper Stephen MacNeil from Brethren, Michigan, who performs nightly at Arcadia Bluffs, and his son Roddy, who attends Alma College on a piping scholarship, serenaded the Haggis with a musical procession while Chef Phillips pushed a rolling cart carrying the platter. 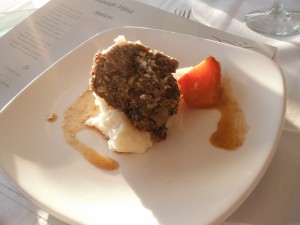 “I haven’t seen a traditional haggis ceremony since I was at the Gleneagles in Scotland in the 1950’s,” Wright exclaimed as MacNeil and Shriver smiled.

MacNeil then dramatically stabbed the stomach with a dagger and pronounced an “Ode to Haggis” by famed Scottish poet Robbie Burns which included the words: “Stomach, tripe or guts, well are you worthy of a grace…while through your pores the juices emerge like amber beads.”

After preparing the haggis, Arcadia’s kitchen staff wondered what to do with the extra seven pounds of ground lamb leftover, so “Lamb Ragu” appeared on the menu as a special that night: “Slow cooked ground lamb tossed with linguine, roasted garlic and tomato with baby spinach and olive oil.” “We sold 23 of them!” Shriver beamed.