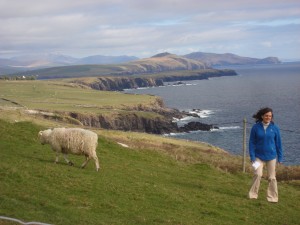 The scenic countryside in the Southwest of Ireland, windswept and pastoral, includes both castles and ruins.

Take a stroll through Detroit’s Irish Corktown neighborhood on St. Patrick’s Day and you’ll find the holiday has become an outlandish blend of New Year’s Eve, Halloween, Oktoberfest and Mardi Gras! Young women with green and white-striped stockings, orange hair, and bouncing, shamrock antennae springs on their heads swig green beer from plastic cups and dance to The Unicorn song. Men, in tents set up outside the Gaelic League and The Old Shillelagh, fake high-pitched Irish accents that sound more like the Lucky Charms leprechaun than a proper, rolling brogue. They’re celebrating an Americanized version of the Emerald Isle’s religious tradition, as they do in Boston, New York, Savannah and Chicago, where the river is turned green in salute.

Irishman Conor Cuneen, a motivational consultant who authored “Why the Irish Never Invaded America,” scratched his head about St. Patty’s Day events when he moved to the United States.

“I am happily exiled in Naperville, Illinois but I have been force fed more corned beef than I ever had in Ireland,” he insists. “The natives are friendly, though, and the Guinness is good.”
But not as good as it in Ireland, according to those who know.

“The Guinness in the U.S. is getting better. There is less difference now than there used to be,” admits Brian O’Callaghan, head golf professional at the tumbling, top-ranked Ballybunion Golf Links along the Atlantic in County Kerry. “There is a great art to pouring it over here. There is a process and a way of pulling a pint and you’ve got to let it cook for a while before you drink it.”

O’Callaghan says you won’t find green beer in Ireland, but you will find colorful, local, village parades. “Families, kids, schools, businesses and even farmers with tractors will be in the parades.”

If your vision of authentic Ireland includes little, white cottages and rainbows over stone-walled green fields, you won’t be disappointed, but you should also remember not all castles you see will be ruins.

Dromoland Castle Hotel and Country Estate, very near Shannon Airport and close to the Cliffs of Moher, the fairways of Lahinch, Galway and Limerick, lets you live like an ancient Irish king, but with modern, 5-star amenities. “The castle was built in 1752 and I can’t understand how they survived in it back then with no central heating. A nice power shower wasn’t available back then like it is now in our hotel. I think people were more robust then. We’ve made ourselves too soft by pampering ourselves too much,” joked Mark Nolan, Dromoland’s general manager. Nolan was very comfortable in the hotel, peering out the window at 1,500 acres of pastoral, undulating land and a lake stocked with rainbow and brown trout – picture perfect Ireland.

The Republic of Ireland is about the size of Ohio, but don’t over-schedule your visit based on distances between towns or attractions. Driving on the left side of narrow, bumpy roads, and being delayed by sheep herds or wandering cows is part of an Irish adventure. Your best bet is just to get there, relax, and, as Tourism Ireland recommends, “go where Ireland takes you.”