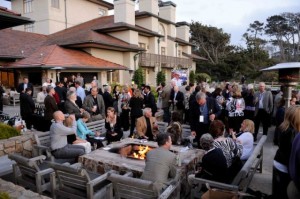 The Elegant Opening Reception at Pebble Beach Food and Wine

April 12 through 15 the famed golf resort hosts “Pebble Beach Food and Wine,” one of the premier epicurean lifestyle events in America.

“It’s crazy. 40,000 bottles of wine end up getting opened that weekend,” boasts David Bernahl, one of the event’s founders. “250 wineries from all over the world are represented and 75 celebrity chefs host more than 70 events over a five day period. It’s hedonism at its finest.”

Attendees get to see cooking demonstrations, sample cheeses and wines, and enjoy some of the most exclusive dining opportunities in the world. Chef Thomas Keller, of Napa’s acclaimed French Laundry Restaurant, for instance, will be honored in an evening salute. French Laundry typically sells out a year’s worth of reservations in two days when it accepts bookings each September. “If you’re a fan of food and celebrity chefs, you can walk up to 25 of them in one afternoon in our 60,000 square-foot grand tasting tent,” said Bernahl.

The event’s Northern California proximity to the amazing restaurants of San Francisco and wineries of Napa Valley and Sonoma enhance the event, according to Bernahl. “We’ve got 100 master sommeliers from all over the country,” he said. They will be participating with attendees in blind tastings called “Secrets of the Sommelier.” “They’re amazing. With one taste, they can discern what type of wine it is, where it’s from, the vintage, and more. Sometimes I think they can even tell the height of the person who picked the fruit! It’s truly impressive!”

The venue, Pebble Beach, is best known for America’s #1 resort golf course, the links at Pebble Beach, which has historically hosted the celebrity-laden “Bing Crosby Clambake,” now the PGA Tour’s AT&T National Pro-Am, as well as U.S. Opens. Jack Nicklaus has said if he had one more round to play in his life, it would be at Pebble Beach. Celebrity chefs including Keller, Daniel Boulud, Ming Tsai, and others will hit the links for the event’s Celebrity Chef Golf Challenge. The tournament will begin with a toast of Dom Perignon champagne and gourmet treats such as lobster rolls will be offered on tees throughout the course.

“Chefs are notoriously horrible golfers,” Bernahl joked. “I think we may have to take out extra insurance on the windows on Charles Schwab’s house!”

Various package prices are available for the Pebble Beach Food and Wine Festival. They may be found at www.PebbleBeachFoodandWine.com

Travel writer Michael Patrick Shiels, a Down river native, may be contacted at InviteYourself@aol.com or via www.TravelTattler.com