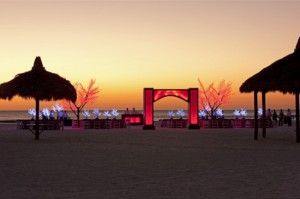 Steve Trevino, a ball-cap wearing comedian recently spotlighted on the Showtime cable TV channel, clutched the microphone on stage at Captain O’Brien’s, a colorful indoor-outdoor restaurant and comedy club on Collier Drive, just down the street from the famed Marco Island Marriott Beach Resort and Spa, on Florida’s Paradise Coast.

“After the show you won’t remember anything I said, so come back tomorrow you’ll laugh your heads off at the same jokes all over again,” he teased, making the customary crack at Southwest Florida’s reputation as a snowbird retirement haven.

“20 years ago that may have been the case, but Marco Island, Naples and Everglades City have evolved into a year ‘round economy now,” insisted JoNell Modys, communications director for the convention and visitors bureau. “The median age of visitors is now 44, and more young families are visiting because we’ve got the white sand beaches and the calmer waters of the Gulf of Mexico. Families and couples love sailing and shelling, and seeing sunsets and dolphins, which the Marriott offers daily.”

We talked over lunch on the patio at Sea Salt, a sophisticated culinary experience on 3rd Street in the Naples historic district. The buildings may be historic, but the locals and tourists populating the scene were anything but musty. Stylish, even sexy diners sipped sauvignon blanc and sampled specials, including the rare, fresh catch hogfish, complimented by over 100 varieties of natural and infused salts, such as Mediterranean, Pink Himalayan, and Kala Mamak – an Indian black salt. “The area has a very high ratio of locally owned restaurants, including Captain Brien’s.’

Historically, Michiganders preferred Florida’s west coast because Interstate 75 led them there. Now multiple daily Delta flights land at Ft. Myers airport in less than three hours. And since the Boston Red Sox have made Naples their Spring Training home, even the easterners are crossing over. College football coaches Brian Kelly and Rich Rodriguez, each of whom had stints with teams in Michigan before their current perches at Notre Dame and Arizona, respectively, frequent the lush and flashy Tiburon Golf Club, where both Greg Norman and the LPGA stage professional tournaments. Ritz Carlton guests get access, and sales and marketing director Jim Magnusson includes top of the line Taylor Made rental clubs, shoes and balls in the cost of a round. “It makes it easier for vacationing families or business travelers to play golf without having to drag their equipment down,” said the former PGA of America official. Marco Island Marriott guests can bird-watch and make birdies at The Rookery and Hammock Bay courses. I had a lucky pairing at The Rookery with a retired airline pilot from Atlanta Robert Kiser and his wife Phyllis, who is the sister of U.S. Senator Bob Corker, (R)-Tennessee. Waldorf Astoria guests get golf access to the very clubby Naples Grande which has no homes on the course – a rarity for South Florida.

Michigan-based travel writer Michael Patrick Shiels may be contacted at InviteYourself@aol.com or via TravelTattler.com. His weekday morning radio show may be heard in Lansing on 92.1 FM and elsewhere statewide.