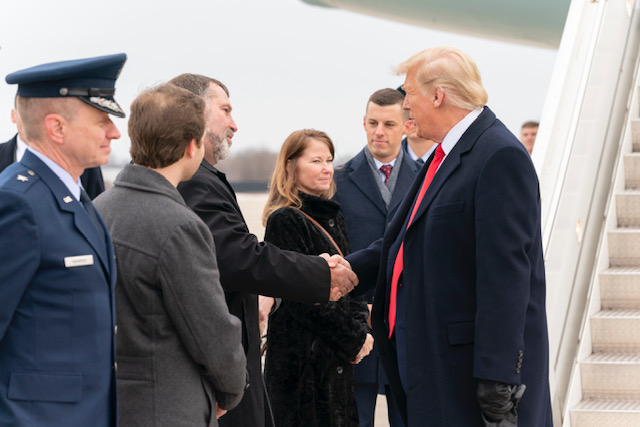 Before Covid 19 shut down non-essential travel for most of us, two Michigan men got to experience the most exclusive airplane in America’s friendly skies: Air Force One – the Presidential jumbo jet.

“That big jet rolls right up. Believe me there are a lot of steps between the door and the ground when he’s getting off that plane. Suddenly you have the President of the United States, who you’ve seen so many times on TV, coming down those steps,” Bednarski said.

The handshake Bednarski enjoyed with the leader of the free world is likely now a gesture of the days gone by.

U.S. Congressman Jack Bergman, from Northern Michigan, climbed aboard Air Force One and flew with the President in January. Bergman, who rose to the rank of Marine lieutenant general, was also a naval aviator and commercial pilot. Did he dream of taking the wheel during the flight?

“There are two ‘Air Force Ones,’” Bergman explained. “The big 747 version I am not qualified to fly. However, the smaller one is a 757 and I am qualified on that one because I used to fly it for Northwest Airlines. But only in an extreme emergency would I ever be asked to take the controls…but I could.”

A few weeks after greeting the President in Michigan, Bednarski got invited to the White House to attend a bill signing (he flew commercial to Washington).

“It’s quite a process to just get into the White House. There are a number of security checks along the way to make sure you’re not carrying anything that would be inappropriate,” Bednarski recalled. “But once you get in the White House, you’re on your own and you pretty much just walk to where you need to go. There is not a lot of guidance there. Once you’ve cleared security you can make a wrong turn very quickly.”

Speaking of quickly, given Bergman’s experience as a commercial pilot, I asked him how a British Airways flight was able to set a trans-Atlantic speed record this winter. The airliner flew faster than 800 mph to make it from New York to London in less than five hours…touching down at Heathrow Airport two hours early.

“It’s all tail wind. Sometimes in the winter when you’re flying up the polar route to London and other European cities, as I did for a number of years, you get that right jet stream going that way and it’s just incredible how fast you go,” Bergman explained. “You can’t really feel the speed onboard because when you’re up at 35,000 feet and you’re looking down Greenland looks small and it looks slow no matter how fast you’re going. And when you’re flying east to Europe it’s usually at night, so it’s dark and there’s not much to look at other than the beautiful stars.”

At the time Bergman had planned include a trip to Iwo Jima to commemorate the 75th anniversary of the famous Marine landing, battle, and flag-raising.

Bednarski commemorated history earlier this year by visiting Havana, Cuba on a trade mission with some Michigan legislators. “It’s quite an experience to step off a plane and basically go back in time 50 or 60 years. It’s hard to explain but what you see on TV in Cuba in terms of the conditions is exactly what you see on the ground,” he said, referring to the communist country’s antique classic cars, Havana’s crumbling ornate buildings, and political culture.

What crop could Michigan sell to Cubans?

“Drinking mojitos, with muddled mint leaves in them, there is quite popular there. We grow quite a bit if mint in the St. John’s area of Michigan, so…”