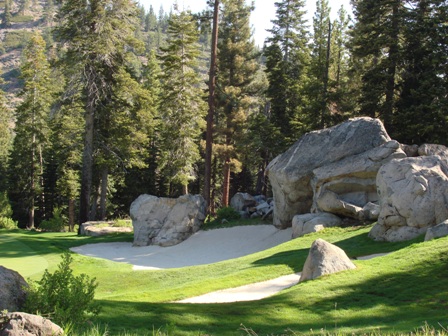 I came to the High Sierras and found the Reno-Tahoe-Carson City-Carson Valley area to be a pristine panorama that is also a fun combination of the Wild West and Las Vegas.

Imagine Traverse City’s scenic east bay surrounded by 10,000-foot snow-capped mountains, with ski resorts looming above the water, casino gaming, and warm desert conditions with lush, green waterfront forests. It sounds dreamlike, but you’ve just conjured up an image of Lake Tahoe. The oblong, crystal clear, blue lake borders Nevada and California with 71 miles of shoreline with an average width of 12 miles and a maximum depth of 1,645 feet. At more than 6,000 feet above sea level, it is America’s largest Alpine lake.

Lake Tahoe is about a 30-minute drive from Reno Tahoe International Airport, but unless you plan on fishing, boating, sailing or swimming, it’s what surrounds the lake that makes the area a colorful playground. You’ll notice slot machines as soon as you emerge from the jetway, and you won’t stop seeing them everywhere from gas stations to donut shops – at least on the Nevada side of the border. High rise luxury casinos such as Atlantis and Grand Sierra Resort dominate the Reno skyline and literally surround the airport, making for convenient and enjoyable fly-in respites. After that bit of gold rush, and an enjoyable afternoon at the Robert Trent Jones Jr.-designed Red Hawk Golf Club, each day brought more adventure!

Making my way just north of the lake revealed Truckee, California – a charming old mining town divided by a railway and full of offbeat shops, restaurants and galleries. Old Greenwood, one of the most enjoyable Jack Nicklaus-designed golf courses I have ever played, is nearby, as is Coyote Moon Golf Club, one of the most pristine, scenic tracks imaginable. The picture postcard town of Truckee, often listed as the coldest spot in California, is just a mile from the Donner Memorial State Park, where a striking monument marks the infamous position that the covered wagons of the 33 members of the Donner Party came to a snowy halt in the winter of 1846. Members of the stranded expedition were forced to resort to cannibalism.

Seeking a bit of more recent American history, I toured another infamous spot – the worn down Cal-Neva Lodge on the northern lakeshore once owned by Frank Sinatra. A thick painted line runs right through the property to mark the California-Nevada border that gives the casino hotel its name. A celebrity showroom still bears the name of Ol’ Blue Eyes, and the weekly Saturday evening tour I took revealed the rental cottages once frequented by Sinatra, JFK, and Marilyn Monroe – and the tunnels beneath them which allowed the Rat Packers to pass paparazzi free!

Further fulfilling my showbiz fix, just past Tahoe City further down the western shore of the lake lies the Fleur du Lac Mansion – best known as Michael Corleone’s house in “Godfather II,” and best seen from a boat, since the gated property is intensely private. (The unmistakable home can be spotted from the main road to the south or by turning down and driving to the beach along the unmarked side road along the north edge of the property.)

At the southeast corner of the lake in the town of Stateline, the high rise casinos Harrah’s, Harvey’s and Horizon, backed by tree covered mountains, literally cease directly on the border and give way to the Embassy Suites South Lake Tahoe and the steep gondola lift for the Heavenly Ski Resort, plus countless smaller, affordable lodging options. Edgewood Tahoe Golf Club, the bunker-filled, tree-lined waterfront home of the annual American Century Celebrity Championship televised each July by NBC Sports. The pond fronting the 18th is known as “Lake Laimbeer” after Detroit Pistons star Bill Laimbeer, competing in the tournament alongside the likes of Charles Barkley, Mark Rypien, Matt Lauer and other stars, sent four golf balls to a watery grave.

The Carson Valley lies to the east back up over and behind the mountain ridge line – 20-minutes south of Nevada’s quaint State Capital Carson City. The 152-room Carson Valley Inn proved to be a charming example of the uniquely small gaming halls that provide a comfortable contrast to the big casinos. I shot dice alone at a crap table with the friendly help of the personable attendants who seemed pleased to have me – and pleased when I won! Pocket full, I went upstairs to see the inn’s fun Nevada-shaped, indoor swimming pool complete with map locations painted on the bottom below the water.

During my short drive back to Reno I spotted the World Famous Bunny Ranch – the legal brothel featured on the HBO reality show “Cat House.” The landmark I couldn’t resist stopping in, though, was sign-posted “Nevada’s Oldest Thirst Parlor” in Genoa. Founded in 1853, it was easy to see why the colorful, authentic saloon has been used as a location in movies starring Clint Eastwood, John Wayne, and James Caan.

Circling Lake Tahoe, driving over the mountain ranges, and exploring the valley floor and Reno is like crawling around a giant playpen of discovery! For more information, visit www.golfthehighsierra.com

One Response to “State of Bliss in Stateline, Nevada”