Pat and Jennifer Gillespie traveled extensively to bring Lansing’s past to the present. The result is the snazzy reopening, after 100 years, of the “Lansing Brewing Company,” which they’ve relocated from Old Town to Shiawassee St. in the growing Stadium District. The developers re-imagined Lansing’s only full-production brewery to include a dynamic gastropub; an industrial-themed, 7,000 square-foot Stockhouse event space; grassy patio; production vat viewing area; and even a gift shop…but retained the authenticity of the working brewery – right down to the smell of fermenting hops. 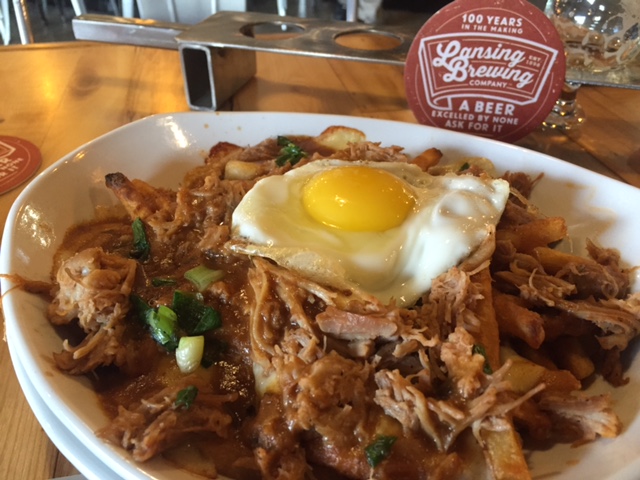 “Jen and I went to Chicago and hired an Uber car in order to experience 21 brewpubs in one day,” Gillespie said while standing in front of the giant stainless steel vats that brew, among 11 others, Amber Cream Ale, a reproduction of the beer of choice in town over 100 years ago. “We went to craft breweries in Frankenmuth, Nashville, Madison, and Columbus, and spent some time in Dublin, Ireland, too, looking for examples of ambience and atmosphere.”

They must have really soaked it up in more ways than one, because Lansing Brewing Company is a creative carnival. And though they searched high and low for where to park the hi-lo, the incorporation of everything from local barn doors as walls to automobile piston rods as beer tap handles is delightful.

The names of the beers add local flavor to the varied flavors: “Angry Mayor IPA” is named for, you guessed it, Lansing’s leader Virg Bernero (“with a hint of bitterness under the surface,” according to the tasting notes); while “Joe in Black Lager” is an homage to Father Joe Krupp, the thirsty pastor at Sacred Heart Parish, in Hudson, and Gillespie’s personal confessor.

The $1.5-million dollar renovation of the building created 75 new jobs, including those of Brewmaster Sawyer Stevens and Chef Chris Carrington, who both bring hospitality and culinary experience from Kalamazoo, Ann Arbor and Grand Rapids. The original menu items are well-traveled too: Chicken and Waffles straight out of the South; and Poutine (French fries with gravy, cheese, braised pork and a fried egg in this version) from Northeastern Canada, to name two. A Quinoa Burger can, perhaps, offset the celebrated calories in the Apple Cider Donut Bread Pudding. Many of the dishes are made with LBC’s Amber Cream Ale or locally produced “Hard Nosed” rum or rye liquors – but don’t worry: the kids menu includes a “bottomless cereal bowl” with straight milk.

Travel back in time to when a beer tasted best right out of the barrel in the back room of the brewery. And don’t forget your flannel shirt and beard. www.LansingBrewingCompany.com