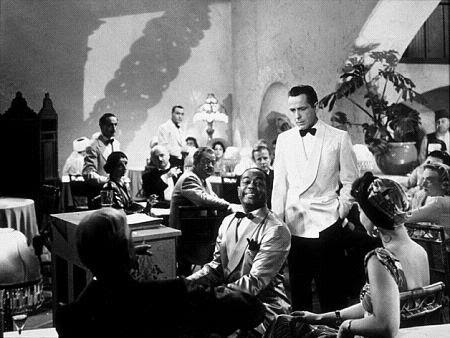 The piano at “Rick’s” played an important supporting role in “Casablanca,” as does the piano at Lelli’s

In the classic movie “Casablanca,” Dooley Wilson played “Sam,” the piano playing, loyal sidekick to Humphrey Bogart’s “Rick Blaine,” who managed upscale nightclub with intrigue and aplomb. “Rick’s,” in Casablanca, was a North African crossroads for travelers from France, Germany, and Russia – many trying to get to Lisbon and on to America to escape the war. “Everybody comes to Rick’s” was even the original name of the film.

Rick Haines runs Lelli’s Inn of Auburn Hills with the same careful attention Rick Blaine did – with his eye on the door to take special care of the cross-selection of business leaders, celebrities and sports stars who drop in for dinner on their way through Auburn Hills, including Bob Seger, Kid Rock, and Sergio Marchionne, the traveling, Transatlantic Italian who heads both Fiat and Chrysler on both continents.

The interesting twist is Haines began his tenure at Lelli’s more like “Sam,” since he was originally hired to be the piano player! His promotion to waiter and then rise to general manager, in the course of two years, might seem swift were it not for the fact he came to Lelli’s after 18 years in Chicago with management experience at the vaunted Four Seasons and Le Meridian hotels. Haines insists the diversity of hospitality positions he’s held serves him well. “I want to be excellent in every aspect of the business: service, food, wine, and atmosphere.”

Lelli’s dark, rich atmosphere is as thick as the stunningly tender steaks it serves – and it has legacy: the chef still uses recipes from 1939 developed by Nerio Lelli who emigrated from Italy created the original Lelli’s Inn Res in Midtown Detroit.

“Enjoying a filet at Lelli’s is like cutting through and eating butter,” says Dan Loepp, President and CEO of Blue Cross Blue Shield of Michigan – one of the Business Leaders of Michigan who settles in for a steak from time to time.

Haines will make a special return to the piano keys when he plays Italian songs with singer Matthew Duncan during Lelli’s special 75th anniversary dinners on September 26 and 27, during which wine tastings will also be paired with each course. Visit www.LellisRestaurant.com for reservations, which are especially encouraged before or after Pistons games or concerts at The Palace or DTE and Meadowbrook Music Theaters.