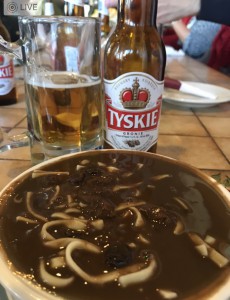 Czarnina is a sweet-sour soup made with duck blood, vinegar, and dried fruits. (Photo by Harrison Shiels)

Michigan’s connection to Poland is palpable.

There is even a link to the late U.S. President Gerald Ford, who was raised in Grand Rapids and is now laid to rest there. Ford’s gaffe, which he uttered in a presidential debate during the 1976 campaign, was in insisting “There is no Soviet domination of Eastern Europe.” Ford’s statement is now a fact that was merely before its time according to Magdelena Zelazowska, of the Polish National Tourism Office.

“Poland is totally independent and, frankly speaking, we don’t identify with any of our ‘past neighbors’ let’s say – neither with Germany nor Russia. We are a totally different country now and a lot of things have changed,” Zelazowska insisted.

Poland is planning to commemorate the 30th anniversary of the first semi-free vote which resulted in Lech Walesa, leader of the independent labor union, Solidarnosc, being elected Poland’s president.

“People who were in Poland in the 1980’s would not recognize the country. The country is rapidly changing. We have great trains and beautiful cities,” said Zelazowska. “And if you’ve never seen Poland it’s a good time to visit any year because if you’re looking for something fresh, undiscovered, new and not so crowded, and at the same time safe and relatively cheap, come to Poland.”

Zelazowska said many people of Polish descent in the Midwest region of the United States, who flock to events in Michigan like the Boyne Polish Festival and the Posen Potato Festival, have roots near Krakow, a medieval city near the Czech Republic; and Zakopane, a resort town at the base of the mountains also in southern Poland.

Polonia Restaurant, located in Detroit’s Hamtramck neighborhood, Polonus, in Wyandotte, and Sabina’s, in Melvindale – all Polish enclaves – are very popular for Polish cuisine, as is the Smolak families’ Legs Inn, a seasonal eatery on Lake Michigan in Cross Village north of Harbor Springs.

“Pierogi are my favorite Polish traditional food and everyone’s favorite, really. They are filled with cheese and potato, fruit, meat, mushrooms, buckwheat, or prunes. You can have them salty or sweet and even treat them as a dessert,” Zelazowska explained.

For some, their only Polish cuisine experience is eating paczki each year on the day before Ash Wednesday. New Palace Bakery, also in Hamtramck, is famed for the traditional, fruit or custard-filled decadent donuts they produce on “Fat Tuesday,” as is Quality Dairy, in the Lansing area.

“Paczki are sweet and very heavy. If you’re on a diet, well…too bad,” said Zelazowska, who suggests burning off the calories by dancing the Polka. “It’s a very energetic dance.”

Visitors to Poland will find other active experiences.

“Poland has a lake district for sailing and canoeing; and beautiful mountains with hiking trails and rivers. We have a cycling route which takes you from the north of the country along the eastern border. It’s beautifully green because it goes through our forests,” she said. Zelazowska then suggested visitors quench their thirst with a Polish craft beer. “After the Soviet times there was a pause in people manufacturing their own beer, but now we can surely compete with German beers or Czech beers because our small breweries which are now blooming.”

Like Irish Americans, many people of Polish descent are now also returning to follow their lineage and seek their roots and finding a vibrant experience in historic, cultural, Poland.