During the pandemic pizza has come to the rescue. But then again what food has historically traveled better in a carry-out situation than a piping-hot pepperoni pizza in its own custom carton?

Pizza can also help you travel, too. Cheese gives comfort, but the mozzarella can give us movement. 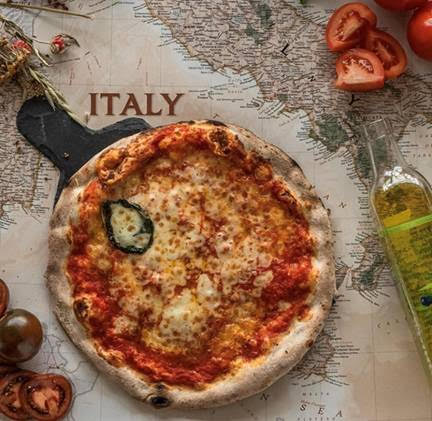 In Lansing, traditionally, eastsiders have gobbled up Spagnuolo’s pizza for decades. DeLuca’s dominates the pizza landscape on the west side of Lansing. Those two restaurants represent multiple generatios of traditions from family founders who emigrated from Italy to Ingham County. Yet their famed pizzas are very different from each other.

For a taste of cultural variety, maybe the St. Gerard neighborhood crowd could wander east over to Okemos to sample Silvana Spagnuolo’s sauce, which her mother taught her to make back in Altila, a tiny town in the Calabria region of southern Italy.

In a cultural exchange, perhaps the Meridian Township types out of curiosity might head west on Willow Road and like the legacy Italian immigrant Pat DeLuca launched in 1960.

And as you sample styles you can even bring southern Italy to your front porch by ordering a genuine pizza from Talia di Napoli, a new company which fully wood-fires the pies in Naples – where margherita pizza was invented in 1889 to honor the queen – then cryogenically freezes them and ships them for free.

“The margherita pizza portrays the colors of the Italian flag with its green basil, white mozzarella and red tomatoes,” said native Neapolitan and company CEO Edouard Freda. “Our goal is to be an ambassador of the city and bring Naples to your table. Naples is sheer beauty – but it is simple beauty.”

“When I would walk the streets taking in the hustle and bustle I would explore the small pizza parlors adjacent to the main streets. I was guided by the delicious smells emanating from their ovens.”

The legendary Napoli “Pizzaiuolo” (a master pizza chef) is a position actually designated with UNESCO World Heritage status. Talia di Napoli lists its other flavors, including four cheese; primavera; tartufina; bianca; rossi, and gluten free, at TaliaDiNapoli.com where they can be ordered and shipped in multi-pizza packs.

You can also summon and sample a another famed regional pizza – albeit very different – from across Lake Michigan instead of the Atlantic Ocean when you order a shipment from Lou Malnati’s, which has been freezing and shipping their Chicago-style deep dish pizzas for decades.

Marc Malnati, who inherited the family reins, said during the pandemic production has increased by several hundred percent as the pies travel to people curious to try them as far away as Alaska. Malnati said his grandfather’s recipe, which became the “Chicago pizza” we know today, came right out of the hills of northern Italy.

“It’s hard to describe without having a big slice in front of you,” Malnati said. “It is something to behold. It is a buttery, flaky crust that is both crunchy but it still kind of melts in your mouth. There is a beautiful, creamy mozzarella from Wisconsin and then we pile on the sausage from the stockyard capital of the world here in Chicago. We finish with whole, peeled tomatoes from California that just burst with sugar and flavor because they’re picked at the perfect time of the year.”

Varieties of Lou Malnati’s pizza can be ordered at TastesOfChicago.com

Contact Michael Patrick Shiels at MShiels@aol.com  His radio program is heard weekdays at MiBigShow.com or in Lansing on WJIM am 1240 from 9-noon.