Keith Salwoski, who earned a journalism degree at Michigan State University in the late 1980s, first blended tourism and show business when he, as a very young man, took a Christmas gig dressing up as a “Bah Hum-Bear” at Detroit Metro Airport and passing out coupons to travelers.

“Little did I know it would start a career that took me to Disney and here to Las Vegas,” said Salwoski, who, after positions as a suburban Detroit newspaper reporter and publicity staffer in Orlando at Walt Disney World is now the executive director for public relations for Venetian Resorts. “I knew since I was a sixth-grader delivering newspapers that I wanted to be a reporter. I really liked to write.” 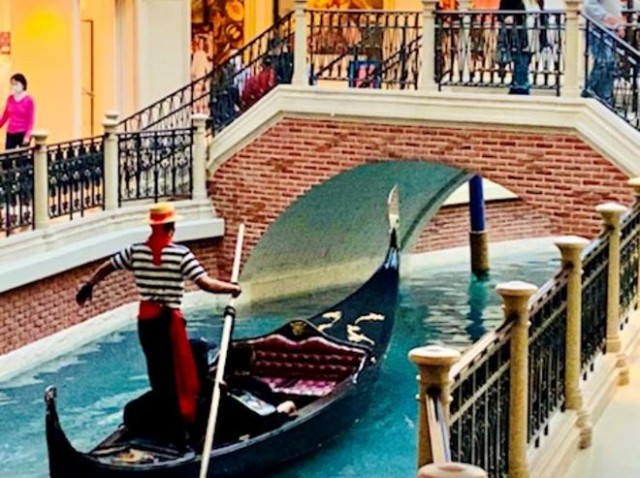 Find gondolier glory at The Venetian. (Photo by Harrison Shiels)

Salwoski said his proudest moment as a scribe was when Downriver’s News Herald Newspapers turned over its Home and Garden section to him for the summer. “I knew nothing about gardening but as a journalist and storyteller I found people to help.”

Salwoski also recalls his “Happiest Place on Earth” moment as a Disney cast member. “Walking through the parks when no one is there is magical.” Like many Michiganders, he grew up a Disney fan vacationing in Orlando. What boy doesn’t dream of having the keys to the Magic Kingdom? So, while at MSU, Salwoski took a semester away to work in the parks and take Disney University classes. That internship redirected his career from being an ink-stained scribe to being a flack for various hotels in the Disney’s Orlando orbit, also.

Salwoski’s next professional transition took him to America’s other most-visited vacation playground Las Vegas, which, especially at The Venetian Resort, can be described as Disneyesque. Its theming is more extensive than the Italian section of EPCOT’s World Showcase. Venetian visitors can ride gondolas on the resort’s “Grand Canal” which runs through a recreated St. Mark’s Square and beside a Rialto Bridge replica.

“At The Venetian we even offer a ‘Gondola University’ where you can learn what it takes to be a gondolier and try out that experience if you have your heart set on it. The steering and singing are real,” Salwoski said. “The difference between our gondolas and the ones in Venice is ours have little motors to help propel them. Our professional gondoliers have good voices because we work with a local talent agency to find them.”

Though he’s worked at the two most-famed American approximations, Salwoski’s never actually been to Venice – but said he feels like he is there every day. The Venetian encompasses other experiential Italian representations, as well. The newest is Brera Osteria – an Italian restaurant modeled after the sidewalk cafes of the Brera district of Milan.

“The atmosphere here takes you to another place,” Salwoski said. “We try to bring the warmth of the Italian people. We have 10,000 team members who operate The Venetian, which created a new category in Las Vegas called the ‘integrated resort.’ It combined the best elements of a resort – an entire shopping mall, 40 restaurants, theaters, nightclubs, 2.5-million square feet of convention space and 12 swimming pools all in one 7,000 room, all-suites hotel with the Strip right outside our doors.”

Salwoski said its more about escaping and less about gambling and The Venetian is the most success casino in Las Vegas by most measures. “It is fascinating to be a public relations guy here because there is so much to talk about.”

And family life in Glitter Gulch?

“Las Vegas is a great place to live with nice neighborhoods away from the Strip. Most people are in the hospitality industry here so you have great neighbors who have friendliness in their nature and there are great schools,” said Salwoski, whose wife, Amy, was in theme park business and daughter, Ella, performs as a competitive figure skater. “People are surprised by the beauty and the mountains that surround here. Red Rock Recreational Area has a 13-mile loop that will make you feel like you’re far away from Las Vegas. Most people come for two or three days, and that’s fine, but if you want to explore the region our international guests, for instance, stay for a week.”