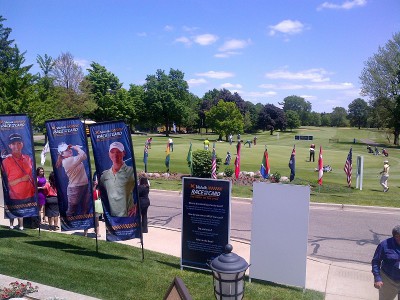 Caroline Powers travels the world without staying in hotels.

“I’ve developed the ability to be perfectly content staying in other people’s homes,” said the professional golfer who left East Lansing in 2013 as the most decorated woman player in Michigan State University history. Powers is “on tour” now earning a living by competing in golf tournaments across America. During the five-day LPGA Symetra Tour events, most of which raise money for local charities, residents in communities hosting the tournaments volunteer to provide the players with complimentary lodging in their homes. “I have met some of the nicest people and have never had a problem. Sure sometimes they might like to chit chat when I come in at the end of a long day, but I don’t mind. It’s a small price to pay.”

With a $500-entry fee into each event, plus all travel expenses and sometimes paying a caddie, costs add up for the self-funded journeywoman and make hotels cost-prohibitive. Originally from Bowling Green, Ohio, Powers is close to her college this week – staying with her aunt and uncle in Marshall while she competes at Battle Creek Country Club in the Firekeepers Casino Hotel Championship. She says while at MSU she learned to get comfy and cozy as a houseguest.

“We traveled often at MSU and were welcomed into private homes. Our coach (Stacy Slobodnik-Stoll) took us all over the place.” She recalled the opportunity to play golf at the very private Los Angeles Country Club. “The Playboy Mansion is along the golf course so my teammates and I tried to boost each other up to peek over the wall into the compound. We saw monkeys running around on the property!”

Powers earned playing spots in the World University Games, which resulted in travel to the Czech Republic and in China.

“I am not going to lie. My first meal on arrival in Beijing was at Pizza Hut,” she admitted. “I did eat some local cuisine in China but sometimes I wasn’t even sure what it was. I was afraid to ask. So I definitely prefer American-style ‘Chinese food.’”

In Battle Creek this weekend, though, Powers, in a sense, is playing host to the world as 144 lady golfers have come to Michigan from 27 different countries including players from the Far East, Europe, the United Kingdom, Scandinavia, Africa and South America. And while many of the fans and sponsors watching Sunday’s final round will have stayed in the snazzy Firekeepers Casino Hotel, most of the pro players, like Powers, will have bunked with locals.