I wanted to ski like an Olympian – or, more realistically, near an Olympian, so I glided, via Delta, for a weekend at Deer Valley Resort, in Park City, Utah – home to the 2002 Olympic Games, former Presidential candidate Mitt Romney, and movie star Robert Redford, whose Sundance Film Festival is staged here. 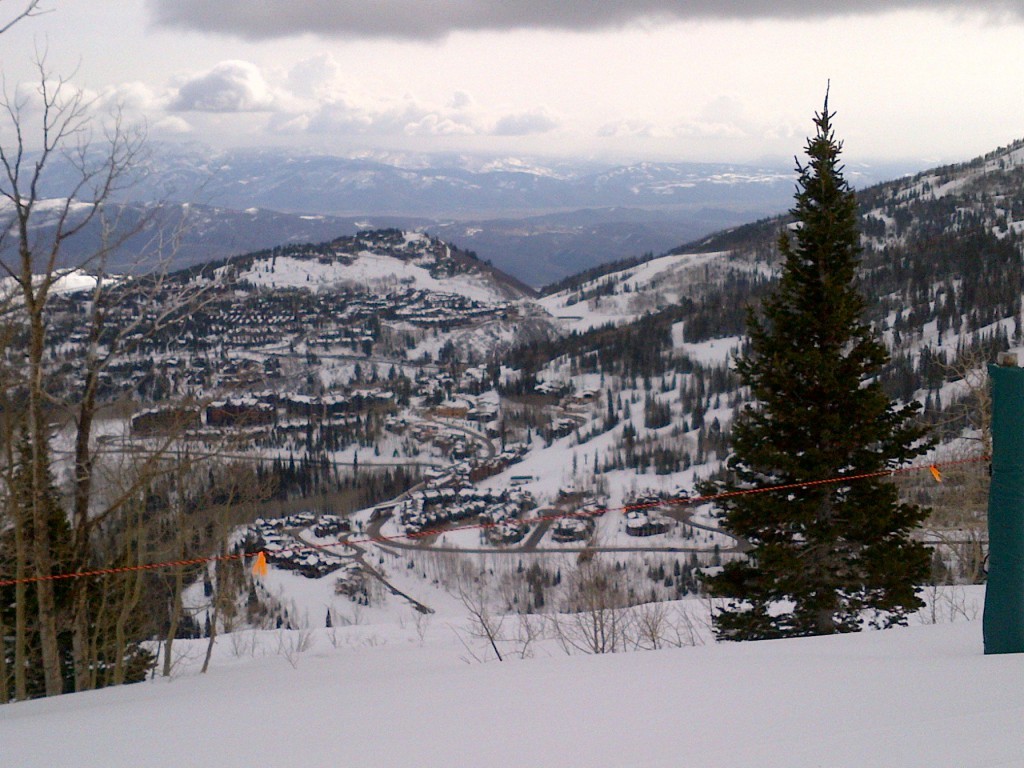 Deer Valley’s ski vista of Utah’s mountain ranges are worth pausing while you glide on the groomed trails. (Photo credit Harrison Shiels)

SkiButlers.com had actually delivered my rental skis and accessories directly to my room, so I lost no time in taking a ski lesson. Marcel Radu, a transplanted Transylvanian, was appointed as my instructor. For three invigorating hours the Romanian guided me – a very average skier – merrily around the friendly, 9,500-foot mountain’s 101 runs, stopping for photos which included a vista of three majestic mountain ranges that God himself must admire. Marcel loves resort and the natural terrain, and derided one visible structure as “Communist gray – it reminds me of home. But it’s a pillow on the mountain that brings us more skiers.”

Those skiers can chose from runs that are 32-percent black diamond; 41-percent blue; and 27-percent green. But Marcel even guided me – a green-to-blue skier to onto a portion of a run used in the Olympics – then steered me away from the daring part. With patience and slope-side manner, upon approaching a dramatic ridge dropping off hundreds of feet, he stopped me and kindly said, “Michael Patrick, in case you ever bring anyone to Deer Valley who is intimidated by narrow runs like the one we’re about to ski, just tell them to ‘stay to the left and snow plow slowly through the pass.’” The Transylvanian translation, as I figured it, was: “Michael Patrick I can see you’re about to wet your pants with fear…so do as I say.”

I played along, did what he said, and was rewarded with him singing a few bars of John Denver’s “Sunshine on my Shoulders”…imagine that with a Romanian accent!

We finally skied over for lunch “on-mountain” at Royal Street Café, where Michigan State alum Emily Summers, who is communications manager for Deer Valley, talked with us while I sampled a blueberry Mojito, crawfish bisque, and tuna tacos. “Unlike most Colorado ski resorts, you can fly Delta to Salt Lake in the morning, be driven 36 miles from the airport, and ski the day you arrive…and schuss the day you leave, too,” she said. “Time-wise, in terms of convenience and quality of experience, it’s perfect. Her boss, DeerValley president and CEO Bob Wheaton, is, like her, a Michigan-native who headed west as a young man. Michigan business icon Roger Penske has long had a major ownership stake.

One note – though wildlife at Deer Valley includes moose, foxes, mountain lions, deer and more, they do not allow snowboarders, to the delight of most. But virtually adjacent to Deer Valley and Park City are ski resorts Canyons, Park City Mountain Resort, and Brighton (owned by Boyne USA), with Sundance Mountain Resort, a much more intimate, rustic experience, just down the road. See DeerValley.com or SkiUtah.com for more information.