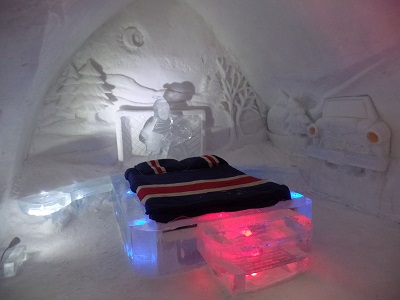 Guest rooms at the ice hotel are each themed differently but all cold!

Don’t bother complaining to the front desk if your room is cold at Hotel de Glace – it is supposed to be. In fact, the front desk is made of ice – as is everything – at North America’s only authentic “ice hotel” just outside Quebec City, Canada. At roughly $200 per-person per night, the hotel’s 44 rooms, believe it or not, run at 95-percent occupancy during its’ seasonal existence from early January until late March. 50 workers sculpt the 44-room hotel which freezes over 48 hours just after Christmas. During the day, curious tourists, for about $18, scour the grand ice lobby – with its’ dramatic, 850-lbs. frozen milk chandelier – and peek into each of the rooms, themed with snow-sculptured walls and elaborate natural scenes such as trees, birds, fish and even professional hockey teams.

The sheer size of the operation and its’ elaborate nature are astonishing and take your breath away even before the cold does. The hotel is ablaze with colored lighting and some suites have encapsulated fireplaces – but they throw off no heat. That may sound romantic, but bear in mind the temperatures in the rooms, which are accessed by going through a curtain, are at 20-degrees Fahrenheit. Hotel guests sleep – or try to – on a mattress laid atop an ice block bed in individual thermal sleeping bags while wearing stocking caps.

“A couple would have to be very determined for there to be any physical intimacy,” said a hotel spokesperson when asked the indelicate question. Indeed, even getting out of the thermal sleeping bag to answer nature’s “other call” in a building outside the hotel during the night can be tricky. “It’s important not to let any cold air into the thermal sleeping bag. We give all our guests instructions and an orientation before they check in at 9 p.m.” 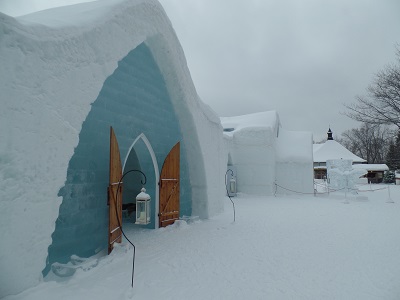 How to keep busy, then, without carnal conjugality, telephones or television? The hotel also offers an icy wedding chapel (hopefully not a harbinger of the warmth of the marriage); a frozen special event center called “Celsius Pavilion”; an indoor Grand Ice Slide (for kids or adults); an outdoor hot tub and adjacent Arctic Sauna; and a lively frigid Ice Bar with special drinks served in glasses made of ice, including the arctic blue “Nordique”: vodka, Curacao blue, and lemonade; or the hotel’s signature mix of vodka and cider served in an ice champagne flute. The music goes into the wee small hours some nights – after all, who is in a hurry to get to bed?

Some guests snowshoe on property or ride inner tubes down snowy hills during the day.

Do any guests fail to make it through the frosty night?

“Oh, yes, from time to time they shiver away to the warm facilities building or even to the nearby traditional hotel up on the hillside,” says the sympathetic spokesperson. The rest have a sub-zero story to tell!

Visit www.hoteldeglace-canada.com for a virtual tour or to book an icy adventure!