Sir Richard Branson, the 64-year old founder of Britain’s Virgin Atlantic Airways, emerged from the fuselage on the tarmac at Detroit Metropolitan Airport last week like a visiting head of state. The eccentric billionaire’s shoulder-length white locks flowed behind him and a gorgeous flight attendant flanked him on either side under each arm. The colorful scene was bracketed by a fluttering Union Jack and the Stars and Stripes.

Branson has crossed both the Atlantic and the Pacific hanging in gondolas under hot air balloons – in far less safe or comfortable conditions than the passengers aboard his airline – even those in “economy comfort,” the class of seat in which Sir Richard Branson, himself, chose to sit on the celebratory inaugural Virgin Airways daily non-stop flight that brought him to Motown from London’s Heathrow Airport. 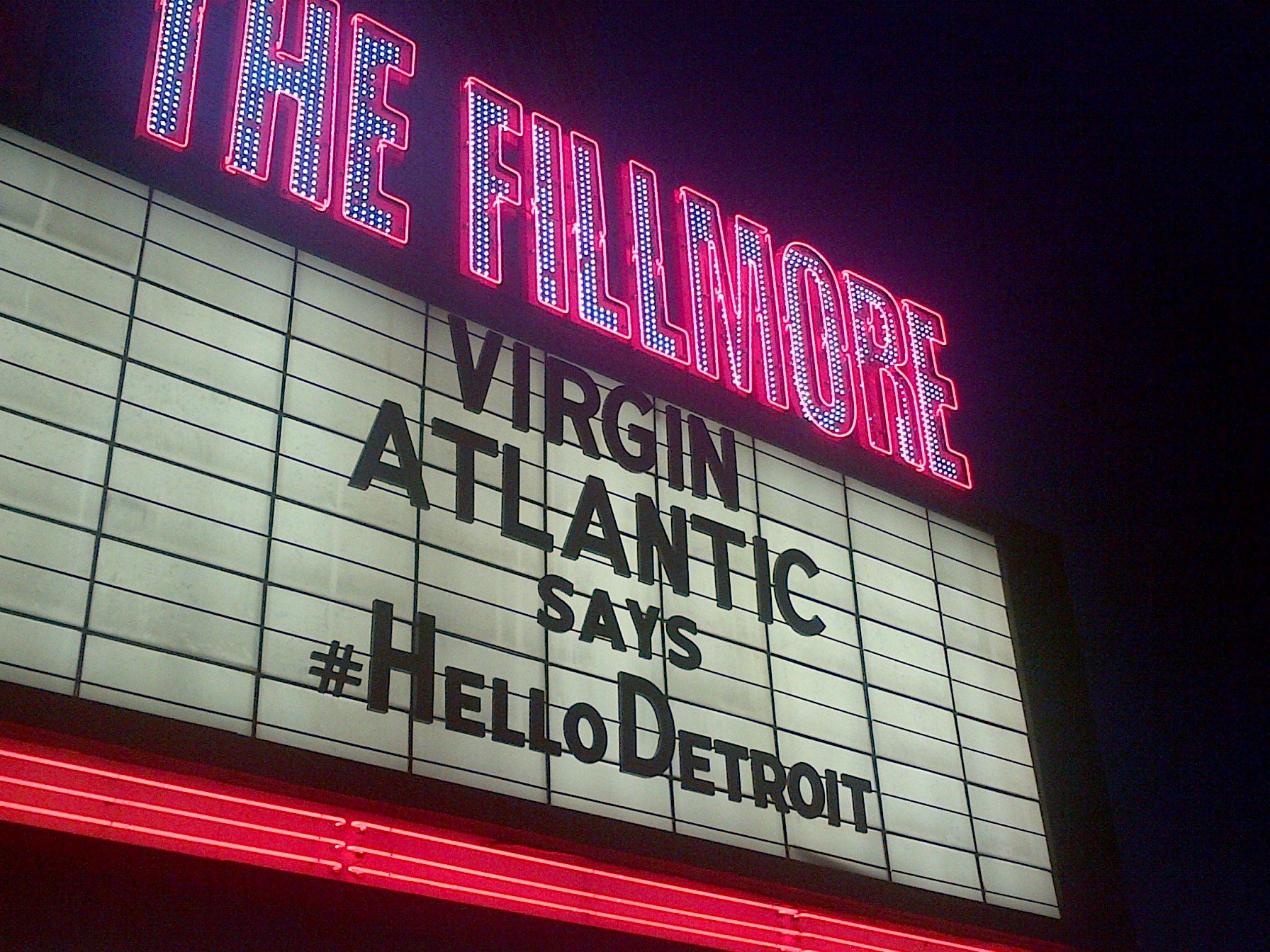 “The creativity and entrepreneurial spirit of Detroit and its’ people is something very close to my heart,” said Branson, who wore a black t-shirt emblazoned with white letters reading “Detroit Hustles Harder.” Most European tourists, though they may fly to Michigan on Virgin Atlantic, won’t have the same two-day entrepreneurial experience Branson did sitting down with Quicken Loans founder Dan Gilbert – another billionaire – at Detroit’s College for Creative Studies to hear investment ideas from would-be “start ups.” Branson also saw new ventures already in action – experiencing an urban bike ride guided by Detroit’s “Slow Roll” tour company – a “movement” designed to keep riders together and safe while exploring neighborhoods. The bike featured the logo of “Shinola,” the local watch company that has become a wearable badge of Detroit pride.

East Lansing’s James Cash, founder of another one of the phenomenally successful new Michigan start-up companies, heard Branson speak during a swank party at Detroit’s Fillmore Theater just after Branson threw out the first pitch at the Tiger game across Woodward Avenue. “He is quite colorful and obviously a ‘big picture guy,’” said Cash, glass of wine in hand as he watched Branson charm the crowd from the stage. With Branson’s Natirar Luxury Resort Estate as a customer, Cash’s innovative Revel Cellars Inc. reinvented the way wine should be stored and displayed by the most discerning of high-end collectors through a groundbreaking design that upended the cellar industry similar to the fashion in which Branson’s Virgin brand raised the service standards and creativity of the traditional airlines.

“I know Delta does well here because it is the only logo I see throughout the entire (Detroit Metropolitan) terminal,” said Branson, Michigan’s newest tourist. “I initially figured the passengers would fly into Detroit and only use the hub airport to get to other places via Delta flights. But now that I have explored Detroit, I think Europeans would be smart to take in the city and see what it has to offer.”