Ireland on St. Patrick’s Day is a bucket list item for many, but, in a sense, every day is festive in Ireland, where sipping a pint in a pub is a cultural experience.

“We enjoy St Patrick’s Day in Ireland but the United States it has become a two-week event for marketers and people party hard on Patrick’s Day and tell stories all about it for weeks after,” says Conor Cuneen, of IrishmanSpeaks.com. The Irish native is a Chicago-based author and corporate communications consultant.

According to Tourism Ireland stats, 1.5-million people from the United States, in 2015, fulfilled their dream of visiting the Emerald Isle.

Williamston’s Gary McMullen and his Michigan-based “Blackthorn” Irish band have been leading groups of 50 people on sold-out tours to Eire for six years.  “We visit the great landmarks and historic sites; and search out Irish music at night. It’s great fun,” he says. 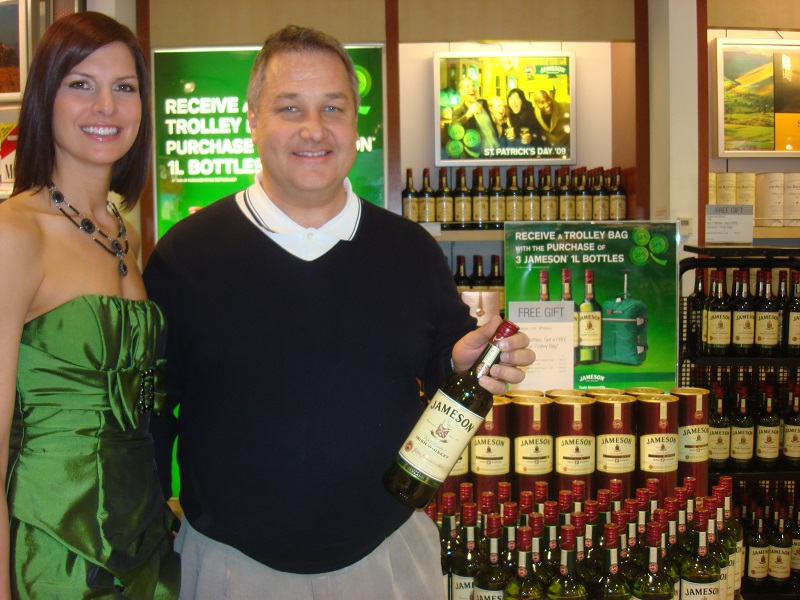 Irish brands reach out to visitors, such as a Jameson presentation encountered at Chicago’s O’Hare Airport

Cuneen can understand why. “People love going there because they’re made to feel so welcome and its’ a great product with good pricing, wonderful atmosphere and scenery. Tourism Ireland’s marketing campaign has been ranked fifth best in the world,” says Cuneen, who also allows that branding of Irish products, such as Kerrygold Irish cheese and butter, has also created global ambassadors. “When people see a shamrock, they think of Ireland. When they see it on the tail of an Aer Lingus airplane in Chicago, New York or Boston, they know they’re in for a genuinely friendly experience aboard Ireland’s national airline.”

Jack Foley, Aer Lingus Executive Vice President for North America, says “Aer Lingus in-flight experience is designed to reflect Irish hospitality alongside the trends of modern Ireland.” Business class flat bed seats, with direct aisle access, convert to work stations, and, in an example of classic Irish hospitality, passengers can shower while their clothes are pressed in a new arrival lounge – dubbed the ‘Revival Lounge” – upon arrival at Dublin Airport.

You can bet that Guinness Irish Stout, with its’ longstanding marketing campaign claiming “Guinness Is Good For You,” is served onboard. “The slogan is so brilliant that when I was much younger the doctor would prescribe a bottle of Guinness for pregnant women because it is rich in iron.”

“Stepping aboard an Aer Lingus flight is like already being in Ireland, in terms of the country’s famed hospitality” says Ray Scott, a radio broadcaster who is also honorary Secretary of Tramore Golf Club in Ireland’s “sunny southeast,” near Waterford, where the crystal factory and museum is another point of Irish pride.

Jameson Irish Whiskey, distilled in Middleton, has been the fastest growing liquor brand in recent years. “Irish whiskey had a reputation as ‘rot gut’ due to prohibition and the rubbish that was sold then,” Cuneen admits. “But now the quality is excellent and through subtle branding and evocative imagery they’ve been able to create a really powerful and successful whiskey brand and culture.”

Lift a glass to Ireland, and all things Irish, because, as the poet Hal Boyle wrote, “On St. Patrick’s Day, everyone is Irish who wants to be.”

Michael Patrick Shiels will host his morning radio show live from Ireland on St. Patrick’s Day from 6-9 am on Team 92.1 FM and via streaming audio and podcast at MiBigShow.com