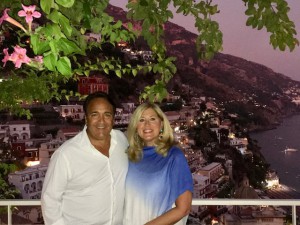 Stephen Scofes returned to Lansing after his recent spree to Capri saying, “On the beautiful Isle of Capri I felt like I’d died and gone to heaven.”

During the trip with his wife Mary Jo, two daughters, and his father, George, the 58-year-old Scofes fondly recalled his mother, Georgia, who succumbed to pancreatic cancer in 2017. Scofes’ paternal grandmother, a Giovanni, was from Sicily – the next increasingly popular Italian location on his vacation bucket list. The Sicilian villages of Savoca and Forza D’Agro outside Taormina were used as settings in the Academy Award-winning film “Godfather Part II.” Bar Vitelli, the terrace café in which Michael Corleone, through an awkward initial meeting with her father, courts Appollonia, the woman he would marry in a nearby church, still operates and welcomes visitors.

But first Scofes will bring Sicily, and some of its notorious Cosa Nostra offspring, to Lansing in order to honor his late mother – and her sense of humor – with “Comedians for Cancer’s ‘Night of 1,000 Guidos’”- a fundraiser for Sparrow Hospital’s Herbert Herman Cancer Center. It will feature Italian American actor Vincent Pastore, who played “Sal Bonpensiaro” on the HBO hit mobster show “The Sopranos” and played a “wiseguy” in films like “Goodfellas” and “Carlito’s Way” with “Godfather” star Al Pacino.

“I’ve been blessed with a number of friendships with people in show business,” said Scofes, whose own godfather was actor the late actor Robert Loggia who appeared in the movie “Scarface” (also with Pacino), and set in Miami. Loggia, who also reluctantly appeared in “The Sopranos,” introduced Scofes to Pastore.

“Loggia told me he didn’t want to appear on ‘The Sopranos’ because he felt the show was degrading to Italian Americans,” said Scofes. “When I found out he eventually accepted a role on the show, I phoned him and called him out. He told me, ‘I’m an actor, kid. I gotta eat!”

Pastore, himself a cancer survivor, will be in from New York and joined on the stage by comedian Jimmy Labriola who appeared with Michigander Tim Allen both on the television series “Home Improvement” and in the movie “The Santa Clause.”

The stylish event, including Mark Randisi’s live performance of Frank Sinatra music so beloved by Italians, cocktails, hors d’oeuvres, a Hollywood-style red carpet walk for guests and an afterglow following the comedy performance will be held at Studio C, the theater in Okemos, on the evening of Saturday, October 13. Only 180 tickets are being sold for $150 each. They are available by calling Scofes & Associates Consulting at (517) 485-5536 or searching the show at Eventbrite.com

“It’s a clean, funny show,” said Scofes. “I wanted to bring something unique and entertaining to Lansing.”