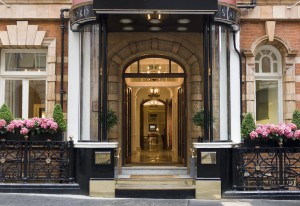 Main, grand entrance of the Kempinski Stafford Hotel, neighbor to the Royals, in the St. James district of London.

A baby is good for business, according to tourism officials in Britain, where royal watchers and monarchy mavens have flocked to landmarks such as Buckingham Palace, Westminster Abbey, Windsor Castle and the Tower of London recently for Her Majesty Queen Elizabeth’s Diamond Jubilee and the Royal Wedding of Prince William and Kate.

“The buzz is so positive. Everyone is happy. The attention given to Kate and the baby is huge,” says Frank Laino, concierge at Kempinski’s Stafford Hotel in London about the official news that the princess will deliver a child who will be third in line to the throne. “William and Kate have made a great connection with normal people. Everyone can identify with them, which is so good for the monarchy.”

So touchable are the Prince and Princess they can often be seen there having a drink at The Stafford when they’re staying at St. James Palace, their nearby residence. “We have the Royals as neighbors because we’re in the most historic part of London, where all the Royal events take place. Trooping the Colour, Beating Retreat, and the Changing of the Guard are right on our doorstep. We’re two minutes walk from both St. James andBuckingham Palace,” says Laino. “We have a long affiliation with the Royal Family. It’s entirely possible when you stay with us at The Stafford you will see them. Not long ago Prince William was in the bar with his friend (soccer superstar) David Beckham having a quiet drink.”

Laino says “The Stafford Way” is to leave the Royals alone and not bother them, but that William and Kate are nevertheless very friendly.
“There was a difficult period for the Royals, so it was vital to have that connection between the Monarchy and the people reestablished. And now it has been.”
Laino suggests that first time visitors to London see the iconic sites. “Westminster Abbey, where William and Kate were married, is such an historic place and it encapsulates everything about London. Do a Beefeater Tour at the Tower of London, too, and see the crown jewels.”
And a trip to the famed Harrod’s department store?
“It can be arranged. We could certainly use a boost to the economy!”
Economically affordable, Laino insists, `is that Kempinski’s Stafford Hotel is.
“We’re a luxury hotel but we’re very accessible. Lots of people in the industry know The Stafford as a ‘hoteliers hotel’ and love us.”
Of course a traditional day in “Blighty” must include tea time, which The Stafford offers in late afternoon. “Everything stops for tea. We have a wonderful ‘High Tea’ with homemade scones, pastries and cakes,” says Laino. Did someone say “crumpets?”