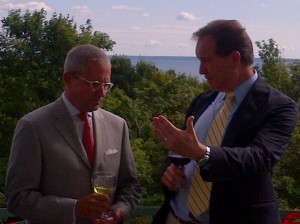 Superstar sportscaster Jim Nantz and his wife Courtney travel during parts of 48 weeks each year. When they’re home, they “live on vacation” at Pebble Beach, on the Monterey Peninsula in Northern California, near wine country, an industry Jim has now splashed into.

“The sounds of the surf, the scent of the salt air, and the bracing coolness of the ocean waters stir fond memories,” writes Nantz in his bestselling autobiography Always By My Side…the Healing Gift of a Father’s Love. “To this day when I need a tranquil setting in which to ponder life’s difficult questions, I immediately out to the beach and walk along the water’s edge.”

Though they stay in comfortable digs, their travels are not vacations, though. On the contrary, Jim serves as play-by-play sports commentator and host for NFL, NCAA Basketball and PGA Tour telecasts on CBS, which means he spends time in places as diverse geographically and culturally as Indianapolis, Augusta, Boston and San Diego covering, at their heights, the Super Bowl, Final Four, and Masters Tournament. Nantz learned the breakneck pace of broadcasting and travel early in his career, November 10, 1984, when he got stuck in a stadium elevator and missed the first quarter of a BYU college football game he was supposed to call. “Right after the game I was helicoptered from Provo to Salt Lake City. I then caught a flight to Denver where I [covered the] Jazz – Nuggets NBA contest.”

By 2007 he’d called the Super Bowl, Final Four, and Masters Tournament in a nine-week stretch, a feat he has replicated since.

Lest you think all television and travel is glamorous, this summer he squeezed in a three-night visit with his family to Mackinac Island’s Grand Hotel in between PGA Tour events in Toronto and Akron…every mile of it with Jim himself behind the wheel as opposed to a private plane. “I like to drive,” he claims. Last November, after calling the Detroit Lions overtime loss on Thanksgiving Day, the superstar broadcaster, like everyone else, fought traffic to drive to turkey dinner. In his case, it was “over the river and through the woods” to Cleveland. “The first 30 minutes after a broadcast I am on both and incredible high and a powerful letdown at the same time,” he explains.

When Nantz truly says “aloha” to work for a week or so, he is known to unwind in Hawaii.

For the month of November, 20-percent of profits from online sales of “The Calling,” Nantz’s premium wine, at www.thecallingwine.com will be donated to the Nantz National Alzheimer’s Center. “The Calling” chardonnay and cabernet are produced in California with Jim by Deutsch Family wines from Dutton Ranch vineyards in the Russian River Valley and Rio Lago vineyards in the Alexander Valley.